Calculate the Total Capacitance for Parallel and Series Capacitors

Capacitors store energy for later use. The capacitance is the ratio between the amount of charge stored in the capacitor and the applied voltage. Capacitance is measured in farads (F).

Consider the first circuit shown here, which contains three parallel capacitors. Because the capacitors are connected in parallel, they have the same voltages: 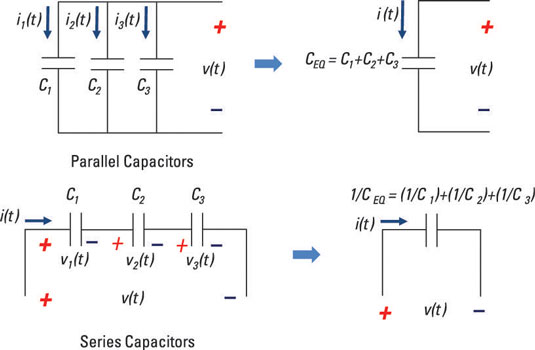 Adding the current from each parallel capacitor gives you the net current i(t):

For parallel capacitors, the equivalent capacitance is

Find the equivalent capacitance for capacitors in series

For a series connection of capacitors, apply Kirchhoff’s voltage law (KVL) around a loop in the bottom diagram of sample circuit. KVL says the sum of the voltage rises and drops around a loop is 0, giving you

A series current has the same current i(t) going through each of the series capacitors, so

The preceding equation shows how you can reduce the series capacitance to one single capacitance: