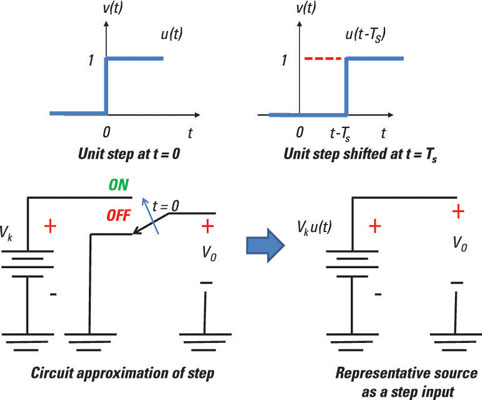 The circuit approximation of the step function shown earlier assumes you can quickly change from off to on at time t = 0 when the switch is thrown.

Although the unit step function appears not to do much, it’s a versatile signal that can build other waveforms. In a graph, you can make the step shrink or stretch. You can multiply the step function u(t) by a constant amplitude Vk to produce the following waveform:

The scale or weight of the unit input is Vk. The amplitude Vk measures the size of the jump in function value.

You can move the step function in time with a shift of Ts, leading you to a shifted, weighted waveform:

This equation says the function equals 0 before time Ts and that the value of the function jumps to Vk after time Ts. Here you see the step function weighted by Vk with a time shift of Ts. 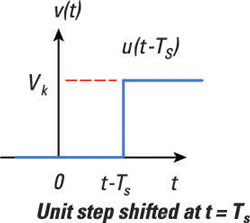 You can add two step functions together to form a pulse function, as you learn in the next section.

Step functions can dance around, but it’s not the fancy twist-and-shout kind of dancing. The function can become bigger or smaller and move to the left or right. You can add those modified step functions to make even more funky step functions.

Before 1 second, the value of the pulse is 0. Then the amplitude of the pulse jumps to a value of 3 and stays at that value between 1 and 2 seconds. The pulse then returns to 0 at time t = 2 seconds. You wind up with the rectangular pulse p(t) described as the sum of two step functions:

Build a ramp function with a step function

The integral of the step function generates a ramp function, which consists of two functions multiplied together:

The time function tu(t) is simply a ramp function with a slope (or strength) of 1, and the unit step function serves as a convenient mathematical tool to start the ramp at time t = 0. You can add a strength K to the ramp and shift the ramp function in time by TS as follows:

The ramp doesn’t start until TS. Before the time shift TS, the ramp function is 0. After time TS, the ramp has a value equal to Kr(t – TS).

With ramp functions, you can create triangular and sawtooth functions (or waveforms). Here you see a ramp of unit strength, a ramp of strength K with a time shift of 1, a triangular waveform, and a sawtooth waveform. 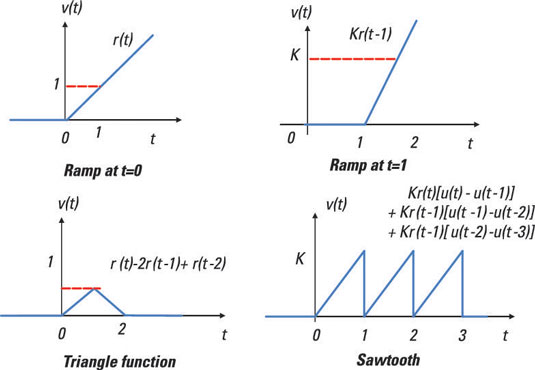 Building such waveforms from other functions is useful when you’re breaking the input into recognizable pieces and applying superposition.

Here’s how to build the triangle function shown in the figure, using ramp functions:

Here’s the math behind this:

Here’s how to build a sawtooth function like the one shown in the figure, using ramp and step functions: