Use op amp circuits to build mathematical models that predict real-world behavior.The mathematical uses for signal processing include noninverting and inverting amplification. One of the most important signal-processing applications of op amps is to make weak signals louder and bigger.

The following example shows how the feedback affects the input-output behavior of an op amp circuit. Consider this sample circuit, which first shows the input connected to the noninverting input. You have a feedback path from the output circuit leading to the inverting input. 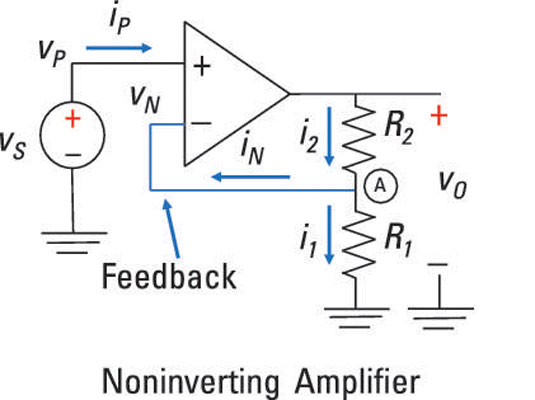 The voltage source vS connects to the noninverting input vP:

You gotta first find the voltage at the inverting input so you can figure out how the input and output voltages are related. Apply Kirchhoff’s current law (KCL) at Node A between resistors R1 and R2.

Recall that Kirchoff’s current law (KCL) says the sum of incoming currents is equal to the outgoing currents.

Because resistors R1 and R2 are connected in series, you can use voltage division. Voltage division gives you the voltage relationship between the inverting input vN and output vO:

You now have the ratio of the voltage output to the input source: 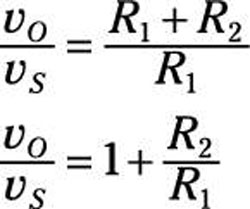 You just made the input voltage vS larger by making sure the ratio of the two resistors is greater than 1. To make the input signal louder, the feedback resistor R2 should have a larger value than input resistor R1. Piece of cake! For example, if R2 = 9 kΩ and R1 = 1 kΩ, then you have the following output voltage: 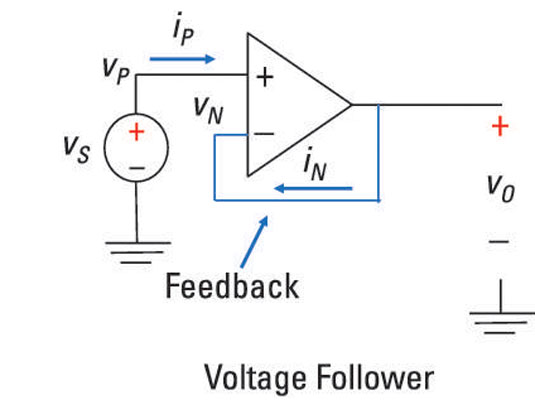 You can express this idea as

You also see that the output vO is connected to the inverting terminal, so

An ideal op amp has equal noninverting and inverting voltage. This means that the preceding two equations are equal. In other words

You can also view the voltage follower as a special case of the noninverting amplifier with a gain of 1, because the feedback resistor R2 is zero (a short circuit) and resistor R1 is infinite (open circuit): 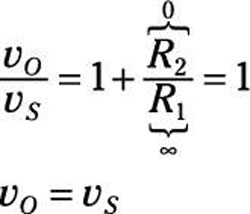 When they do affect each other in a bad way, that’s called loading. A voltage follower solves the loading problem.