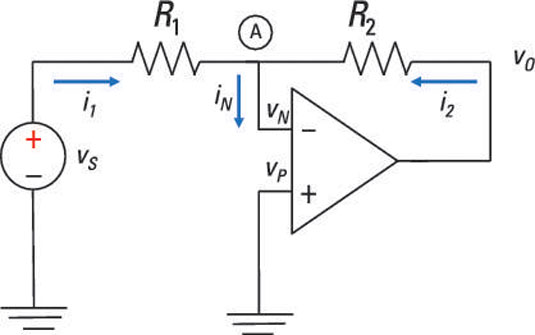 Because the noninverting input is grounded to 0 volts, you have

Apply Kirchhoff’s current law (KCL) to Node A to get the following:

Simplify the equation with the following constraints for an ideal op amp:

You wind up with the following relationship between the input and output voltages:

Again, the amplification of the signal depends on the ratio of the feedback resistor R2 and input resistor R1. You need only external components of the op amp to make the signal way bigger. The negative sign means the output voltage is an amplified but inverted (or upside down) version of the input signal.

For a numerical example, let R2 = 10 kΩ and R1 = 1 kΩ. In that case, the inverted output voltage vO is ten times as big as the input voltage vS. In nothing flat, you just made a weak signal stronger. Nice work — you deserve a raise!

Resistors should be around the 1 kΩ to 100 kΩ range to minimize the effects of variation in the op amp characteristics and voltage sources.