With the help of superposition, you can break down the complex circuit shown here into two simpler circuits that have just one voltage source each. To turn off a voltage source, you replace it with a short circuit. 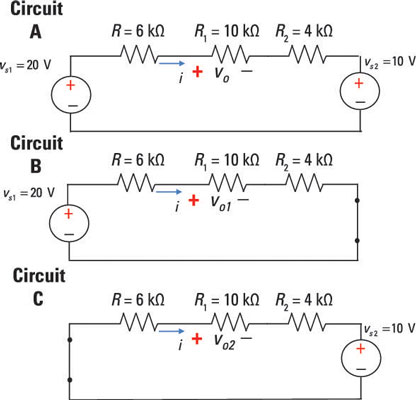 Summing up the two outputs due to each voltage source, you wind up with the following output voltage:

To find the output voltages for Circuits B and C, you use voltage divider techniques. That is, you use the idea that a circuit with a voltage source connected in series with resistors divides its source voltage proportionally according to the ratio of a resistor value to the total resistance.

In Circuit B, you simply find the output voltage vo1 due to vs1 with a voltage divider equation:

Adding up the individual outputs due to each source, you wind up with the following total output for the voltage across the 10-kΩ resistor:

When the sources are two current sources

The plan in this section is to reduce the circuit shown here to two simpler circuits, each one having a single current source, and add the outputs using superposition. 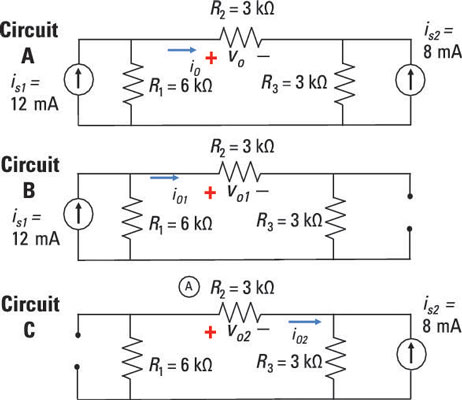 You consider the outputs from the current sources one at a time, turning off a current source by replacing it with an open circuit.

Similarly, Circuit C is Circuit A with only current source, with is1 replaced by an open circuit. The output current due to current source is2 is io2.

Adding up the two current outputs due to each source, you wind up with the following net output current through R2:

To find the output currents for Circuits B and C, you use current divider techniques. That is, you use the idea that for a parallel circuit, the current source connected in parallel with resistors divides its supplied current proportionally according to the ratio of the value of the conductance to the total conductance.

For Circuit B, you find the output current io1 due to is1 using a current divider equation. Note that there are two 3-kΩ resistors connected in series in one branch of the circuit, so use their combined resistance in the equation. Given Req1 = 3 kΩ + 3 kΩ and R1 = 6 kΩ, here’s output current for the first current source: 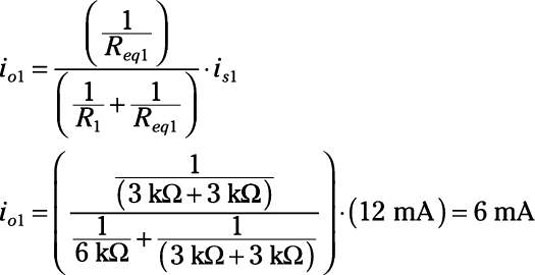 Adding up io1 and io2, you wind up with the following total output current:

When there is one voltage source and one current source

Circuit A of the sample circuit shown here has an independent voltage source and an independent current source. How do you find the output voltage vo as the voltage across resistor R2? 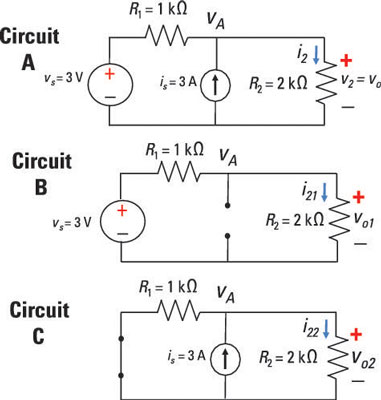 For Circuit B, you can use the voltage divider technique because its resistors, R1 and R2, are connected in series with a voltage source. So here’s the voltage vo1 across resistor R2:

For Circuit C, you can use a current divider technique because the resistors are connected in parallel with a current source. The current source provides the following current i22 flowing through resistor R2:

You can use Ohm’s law to find the voltage output vo2 across resistor R2: