You can analyze circuits with dependent sources using node-voltage analysis, source transformation, and the Thévenin technique, among others. For analyzing circuits that have dependent sources, each technique has particular advantages.

Using node voltage methods to analyze circuits with dependent sources follows much the same approach as for independent sources. Consider the circuit shown here. What is the relationship between the output voltage vo and is?

Using node-voltage analysis involves Kirchhoff’s current law (KCL), which says the sum of the incoming currents is equal to the sum of the outgoing currents. At Node A, use KCL and substitute in the current expressions from Ohm’s law (i = v/R). The voltage of each device is the difference in node voltages, so you get the following:

At Node B, again apply KCL and plug in the current expressions from Ohm’s law:

Rearranging the preceding equation gives you the following node voltage equation at Node B:

You can solve for the unknown node voltages vA and vB using matrix software. After you have the node voltages, you can set the output voltage vo equal to vB. You can then use the ever-faithful Ohm’s law to find the output current io:

To see the source transformation technique for circuits with dependent circuits, consider Circuit A as shown here. 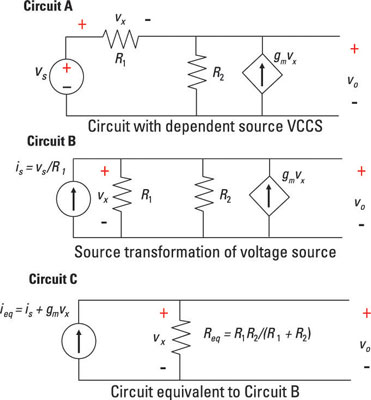 Here’s the equation for the voltage source and current source transformation:

Resistors R1 and R2 are connected in parallel, giving you an equivalent resistance Req:

The output voltage is equal to the voltage across Req, using Ohm’s law and ieq. You see the equivalent circuit with ieq and Req in Circuit C. Because the dependent current source is dependent on vx, you need to replace the voltage vx with vo:

Solving for the output voltage vo gives you

See how the output voltage is a function of the input source? The final expression of the output should not have a dependent variable.

Utilize the Thévenin technique to analyze circuits with dependent sources 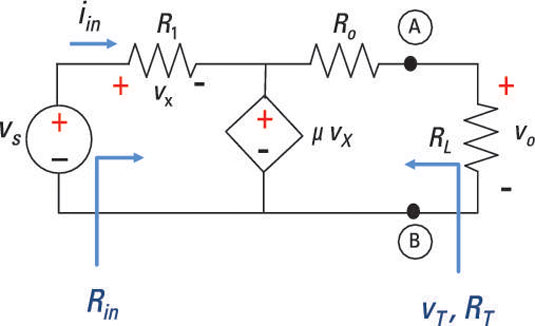 The input resistance is

Using Ohm’s law, the current iin through R1 is

Solving for iin, you wind up with

Substituting iin into the input-resistance equation gives you

Based on the sample circuit, the open-circuit voltage is voc = μvx. You find that the short-circuit current gives you

After finding voc and isc, you find the Thévenin resistance:

The output resistance Ro and Thévenin resistance RT are equal. Based on Kirchhoff’s voltage law (KVL), you have the following expression for vx:

Substituting vx into the equation for the open-circuit voltage voc, you wind up with

When μ is very large, the Thévenin voltage vT equals the source voltage vs.