Second-order RLC circuits have a resistor, inductor, and capacitor connected serially or in parallel. To analyze a second-order parallel circuit, you follow the same process for analyzing an RLC series circuit. 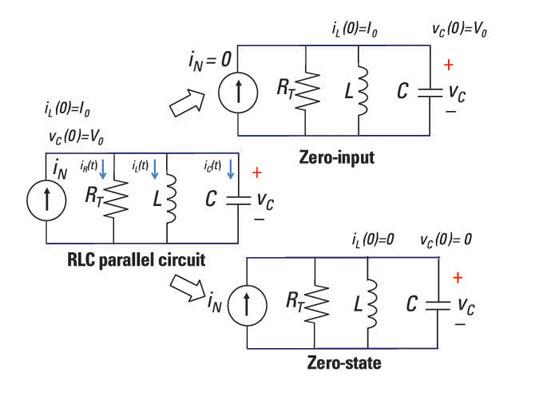 With duality, you substitute every electrical term in an equation with its dual, or counterpart, and get another correct equation. For example, voltage and current are dual variables.

The element constraint for an inductor is given as

Now substitute v(t) = LdiL(t)/dt into Ohm’s law, because you also have the same voltage across the resistor and inductor:

Substitute the values of iR(t) and iC(t) into the KCL equation to give you the device currents in terms of the inductor current:

The analysis of the RLC parallel circuit follows along the same lines as the RLC series circuit. Compare the preceding equation with this second-order equation derived from the RLC series:

Duality allows you to simplify your analysis when you know prior results. Yippee!

The results you obtain for an RLC parallel circuit are similar to the ones you get for the RLC series circuit. For a parallel circuit, you have a second-order and homogeneous differential equation given in terms of the inductor current:

The preceding equation gives you three possible cases under the radical:

The zero-input responses of the inductor responses resemble the form shown here, which describes the capacitor voltage. When you have k1 and k2, you have the zero-input response iZI(t). The solution gives you

You can find the constants c1 and c2 by using the results found in the RLC series circuit, which are given as

Apply duality to the preceding equation by replacing the voltage, current, and inductance with their duals (current, voltage, and capacitance) to get c1 and c2 for the RLC parallel circuit:

After you plug in the dual variables, finding the constants c1 and c2 is easy.

Arrive at the zero-state response

When t < 0, u(t) = 0. The second-order differential equation becomes the following, where iL(t) is the inductor current:

Adding the homogeneous solution to the particular solution for a step input IAu(t) gives you the zero-state response iZS(t):

Here are the results of C1 and C2 for the RLC series circuit:

You now apply duality through a simple substitution of terms in order to get C1 and C2 for the RLC parallel circuit:

The solution resembles the results for the RLC series circuit. Also, the step responses of the inductor current follow the same form as the ones shown in the step responses found in this sample circuit, for the capacitor voltage. 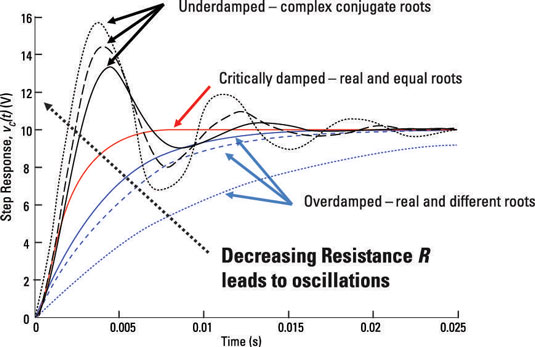