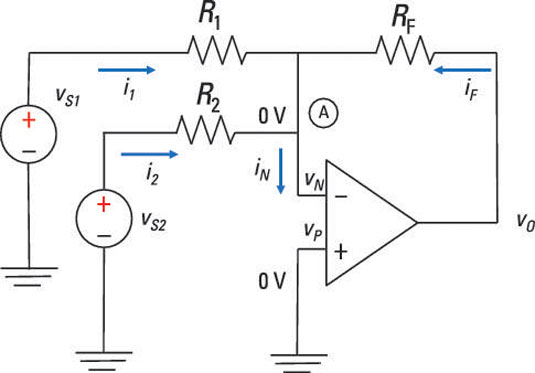 Because the noninverting input is grounded, Node A is also connected as a virtual ground. Applying the KCL equation at Node A, you wind up with

Replace the input currents in the KCL equation with node voltages and Ohm’s law (i = v/R):

Because iN = 0 for an ideal op amp, you can solve for the output voltage in terms of the input source voltages:

The output voltage is a weighted sum of the two input voltages. The ratios of the feedback resistance to the input resistances determine the gains, G1 and G2, for this op amp configuration.

To form a summing amplifier (or inverting summer), you need to set the input resistors equal with the following constraint:

Applying this constraint gives you the output voltage:

This shows that the output is proportional to the sum of the two inputs. You can easily extend the summer to more than two inputs.

The signals are bigger — mission accomplished. If signals are changing in time, the summer adds these signals instantly with no problem.