How to Use Siri for Texting

Apple Watch For Seniors For Dummies

Need to send a text right away? With Siri on your iPhone 4S you can dictate a text and continue your jog down the beach. Not only that, Siri lets you text multiple people and send texts to phone numbers.

Sending a text with your voice is incredibly fast and accurate. There are a couple of different ways to text using Siri. If you'd like to do it one step at a time, the following is the most basic way to compose a text message:

If you choose not to send a text message you've composed, Siri will ask you what you'd like to do with the message. At the top of the screen, you'll see, "To continue, you can Send, Cancel, Review, or Change it." As you'd expect, saying "Send" sends the text; "Cancel" cancels the message; "Review" reads it to you; and "Change" lets you tweak using the keyboard, if need be. 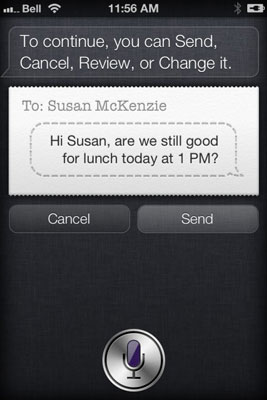 You don't always have to say the word "Text" to tell Siri you want to start a text message. You can also say something like, "Message," or "Tell," followed by the person or phone number you want to send the text message to! Try it; you'll like it.

Texting more than one person

Just as you can send an e-mail to multiple people through Siri, it's also possible to compose and send a text message to more than one recipient. In fact, this can really help save you time:

Sending a text message to a phone number

Okay, so say you're given a phone number to text, but it isn't stored in your Contacts. No problem, as Siri can be used to send a text to a 10-digit number, if you prefer.

Maybe you don't want to add someone to your address book or it's a one-time text (such as a contest you need to enter via SMS).

All you need to do is say the phone number you want to text, and Siri will know what to do. For instance, do this:

Siri won't decipher acronyms or text-speak, so if someone sends you a message with "LOL" or "TTYL," Siri won't say "laugh out loud" or "talk to you later."

Also be aware that you can't send a picture or video message via Siri. If you said, "Text a photo to my wife," it won't ask you which photo to attach; instead Siri will think you want to text the words "a photo" to your wife.