By: Dwight Spivey and
Updated: 12-22-2022
From The Book: iPhone For Seniors For Dummies 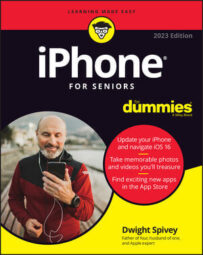 It’s helpful to understand which new features the latest models and iOS 16 bring to the table.

Features of the latest models

Apple’s latest additions to the iPhone family are the iPhone 14, 14 Plus, 14 Pro, and 14 Pro Max. Like their predecessors, they're highly advanced smartphones that leave competitors in the dust. Following, are some of the key features of the latest iPhone models.

The iPhone 14 and 14 Plus models include the A15 chip, while the 14 Pro and 14 Pro Max receive the latest and greatest, the A16. The truly innovative tech in these models demands processors that can handle some heavy lifting while still being able to answer calls and retrieve email, and the A15 and A16 are both more than capable.

No, this isn’t the latest reality show craze, but rather a long-awaited innovation. iPhone models of late have sported a notch at the top of their screens where sensors, cameras, and other hardware reside.

Dynamic Island is a seamless pairing of hardware and software that effectively makes that area come alive with information for you, making it an upgraded notch with a twist, if you will. The notch appears to expand or contract, depending on the notifications, alerts, and other activities its currently tasked with. I hope this great update will find its way into other iPhone models moving forward.

Crash Detection utilizes new gyroscope and accelerometer tech in the latest models to detect when you’ve been in an automobile crash and will cause your iPhone to alert emergency services automatically. Both features are something you never want to need but are thankful to have.

Your new iPhone 14, 14 Plus, 14 Pro, or 14 Pro Max is resistant to damage caused by water splashing onto it or from dust collecting in it. Now, you don’t want to take your iPhone 14 model deep-sea diving, but it’s likely to survive submersion in about six meters of water for up to 30 minutes. In other words, if your iPhone 14 model gets wet, it’s much more likely to survive the ordeal than older iPhone iterations, but it still isn't something you’d like to see happen to your expensive investment.

You might consider acquiring AppleCare+, which is Apple’s extended warranty, currently priced at $149 (iPhone 14), $179 (14 Plus), or $199 (iPhone 14 Pro and 14 Pro Max) per year. Monthly plans are also available. AppleCare+ covers unlimited incidents of accidental damage (but you will be charged minimal fees, based on the nature of the repair), which could more than cover the cost of repairing your iPhone without it. You can also get AppleCare+ with theft and loss coverage for an additional $70 (all four models).

The toughness and durability of Apple’s screens just keeps getting better. Ceramic Shield was developed by Apple and Corning, and according to them, it’s the toughest screen ever for a smartphone, making it four times more likely than other smartphones to survive a drop unscathed.

Don’t think your iPhone is unbreakable. Cases are still a good — no, make that a great — idea. As mentioned, Apple has a line of cases that not only protect your iPhone but also allow for wireless MagSafe and Qi charging. (Qi is an industry-standard wireless charging technology used by Apple and most smartphone manufacturers.)

Any iPhone model from the iPhone 8 and newer (including the SE second generation, and all 11, 12, 13, and 14 models) can use most features of iOS 16 if you update the operating system. This update to the operating system adds many features, including (but definitely not limited to) the following. These are but a few of the improvements made to the latest version of iOS. I suggest visiting Apple's iOS 16 web page to find out more.

If you change your mind, you can easily add them back to your Home screen by searching for them in the App Store and tapping the Get button, or by retrieving them from the App Library. How you recover them depends on the app; some allow you to hide them while others only let you relegate them to the App Library.