Understanding ham radio (or any type of radio) is impossible without also having a general understanding of the purpose of radio: to send and receive information by using radio waves.

Radio waves are just another form of light that travels at the same speed; 186,000 miles per second. Radio waves can get to the Moon and back in 2 ½ seconds or circle the Earth in 1/7 second.

The energy in a radio wave is partly electric and partly magnetic, appearing as an electric field and a magnetic field wherever the wave travels. (A field is just energy stored in space in one form or another, like a gravitational field that you experience as weight.)

These fields make charged particles — such as the electrons in a wire — move in sync with the radio wave. These moving electrons are a current, just like in an AC power cord except that they form a radio current that your radio receiver turns into, say, audible speech.

The radio wave–electron relationship has a wrinkle: The fields of the radio wave aren’t just one strength all the time; they oscillate (vary between a positive and a negative value) the way that a vibrating string moves above and below its stationary position.

The time that a field’s strength takes to go through one complete set of values is called a cycle. The number of cycles in one second is the frequency of the wave, measured in hertz (abbreviated Hz).

Here’s one other wrinkle: The wave is also moving at the speed of light, which is constant. If you could watch the wave oscillate as it moved, you’d see that the wave always moves the same distance — one wavelength — in one cycle. 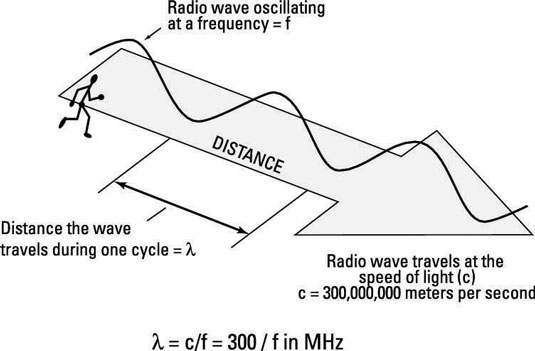 If you know a radio wave’s frequency, you can figure out the wavelength because the speed of light is always the same. Here’s how:

Wavelength = Speed of light / Frequency of the wave

Similarly, if you know how far the wave moves in one cycle (the wavelength), you also know how fast it oscillates because the speed of light is fixed:

Frequency is abbreviated as f, the speed of light as c, and wavelength as the Greek letter lambda λ), leading to the following simple equations:

The higher the frequency, the shorter the wavelength, and vice versa.

The most convenient two units to use in thinking of radio wave frequency (RF) and wavelength are megahertz (MHz; mega means 1 million) and meters (m). The equation describing the relationship is much simpler when you use MHz and m:

If you aren’t comfortable with memorizing equations, an easy way to convert frequency and wavelength is to memorize just one combination, such as 300 MHz and 1 meter or 10 meters and 30 MHz. Then use factors of ten to move in either direction, making frequency larger and wavelength smaller as you go. 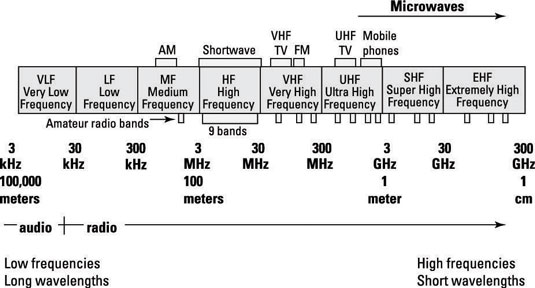 The different users of the radio spectrum are called services, such as the Broadcasting Service or the Amateur Radio Service. Each service gets a certain amount of spectrum to use, called a frequency allocation. Amateur radio, or ham radio, has quite a number of allocations sprinkled throughout the radio spectrum. Hams have access to many small bands in the MF through Microwave regions.

Radio waves at different frequencies act differently in the way they travel, and they require different techniques to transmit and receive. Because waves of similar frequencies tend to have similar properties, the radio spectrum hams use is divided into five segments: