Watching TV on Your PC 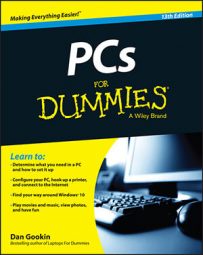 Thanks to high-speed Internet, watching TV on your computer is no longer considered unholy. It used to be that to accomplish such a thing, you needed a hardware TV tuner jammed inside your computer. That’s still possible, though it’s more common these days to use the Internet to keep track of your favorite programs.

Getting a TV tuner

If it’s been on your bucket list to use your PC as a DVR, or digital video recorder, you can gleefully cross off that item. Computers have been able to host television for quite some time. The procedure involves buying TV tuner hardware and then using DVR software to watch and even record your favorite TV shows.

Two types of TV tuners are available: internal and external. The internal cards are more sophisticated but require that you endure the prospect of opening the computer’s case to install them. A saner alternative is the USB TV tuner, which hangs out the back of your PC like a limp noodle. In both cases, you connect the tuner to a TV cable, just as you would connect the TV cable to a TV set.

For DVR software, you can use the Windows Media Player Center program to watch and record TV. In Windows 10, the Movies and TV app can also be used to view TV over a USB tuner.

Here are three sources as consideration for your PC TV entertainment:

More options exist, but these — the big three — are excellent places to get started.

YouTube is perhaps the largest video repository on the planet. The idea is to “broadcast yourself,” so you’ll find lots of homemade and amateur content on YouTube. Some of it is very good and quite entertaining. But true to Sturgeon’s law, 90 percent of it is crap.

Netflix is the premiere online video content-delivery system. It’s stocked full of TV shows, movies, documentaries, foreign films, and other professionally produced content. You need a subscription, which is presently under $10 a month, and then you can watch that content as much or as little as you like.

Hulu is a fine example of a useful website where the name is completely unrelated to the content. In this case, the content consists of TV shows and older movies, all of which are free to watch. Well, yes, they do have commercials, but so does regular TV, and the point of this information is to watch TV on your PC.