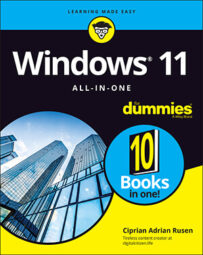 Explore Book Buy On Amazon
Adjusting to a new operating system, whether you're upgrading from an old version of Windows to Windows 11 or you've purchased a new machine running Windows 11, isn't an easy thing to do. In this cheat sheet, you find out what has changed in Windows 11, what you should and shouldn’t do when you start using Windows 11. It also includes how to navigate Windows 11 using keyboard shortcuts, and how to perform touchscreen gestures and commands.

What has changed in Windows 11?

Windows 11 is mostly a visual upgrade to Windows 10, with new user interface elements that make it easier to use on devices with touchscreens and without.

There are also negatives, like stricter hardware requirements that make Windows 11 usable only on recent computers and devices. Here’s a summary of the biggest changes introduced by Windows 11:

If your Windows PC is new enough to run Windows 11 and set correctly, it will probably upgrade automatically through Windows Update by the end of 2022. If it’s not new or powerful enough, Windows 10 will keep running until October 2025. After that date, Windows 10 will stop receiving patches, and Microsoft will recommend that you buy a new PC with Windows 11.

Some dos-and-don'ts advice for Windows 11

Windows 11 is different from previous Windows versions, in both good and bad ways. Here are some dos and don’ts to lower your frustration when using this operating system:

Keyboard shortcuts help people be more productive in the way they use Windows 11. Most people know about Ctrl+C for copy, and Ctrl+P for paste, but true geeks know many more keyboard shortcuts:

Navigating Windows 11 on a touchscreen

Windows 11 no longer has a tablet mode, but it works well on touchscreen devices and is Microsoft’s most touch-friendly Windows version to date. When using a touchscreen, these gestures and commands will help you navigate Windows 11 with ease: