How to Make an Older Program Run in Windows 7 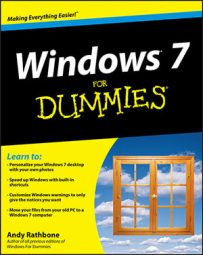 Many programmers design their software to run on a specific version of Windows. When a new Windows version appears a few years later, some older programs aren't compatible and refuse to work. If an older game or other program refuses to run under Windows 7, there’s still hope because of Windows 7’s secret compatibility mode. This mode tricks programs into thinking that they’re running under their favorite older version of Windows, letting them run in comfort.

If your old program has problems with Windows 7, follow these steps: