What Are Windows Server Containers?

Explore Book Buy On Amazon
Virtualization drastically changed the way that IT operated in organizations of all sizes, but containers have had a large impact as well. You may be wondering why someone would want to use containers in Windows Server 2019. They’re just virtual machines (VMs), right? Well, not exactly.

The technologies may seem similar, but containers and VMs are not the same. VMs are presenting virtual hardware to the user. Containers don’t expose the hardware or the operating system; they’re meant to run applications in isolation.

VMs can be thought of as Infrastructure as a Service (IaaS). Although VMs do present virtual hardware to system administrators, the administrators of virtual servers don’t have to be concerned about the underlying hardware. They can focus on the operating system and applications that they’re responsible for.

Containers take this idea and refine it to where each container is responsible for running an application. The application is baked into the image so the containers can be stood up and torn down constantly. This is great for Platform as a Service (PaaS) scenarios where developers just want to test their code and not worry about getting servers provisioned to test against. Developers don’t generally care about hardware or operating systems; they just want to know that their code works in the way they expect it to.

You may be wondering what containers look like. Let's use the example of containers in Windows specifically. At a high level, the architecture looks something like this figure. 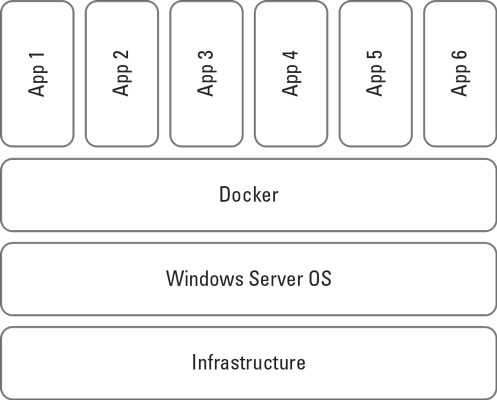 As with most newer technologies, there are new terms that you need to understand to be on the same page as other system administrators who work with containers. Here are the most important terms:

How containers run on Windows Server 2019

Containers use the Docker Engine to run on Windows Server. Containers were first introduced in Windows Server 2016, but the technology and, of course, Docker itself have been around a lot longer than that.

Docker is the engine that is responsible for packaging and delivering container images. Those container images can be based on Windows or Linux operating systems and can run in your datacenter and Windows Server 2019.