How to Create a Smart Album on Your Mac

Explore Book Buy On Amazon
Smart Albums can be very helpful for organizing your Mac photos. Just as you can create Smart Playlists in iTunes, you can sire Smart Albums in Photos based on specific criteria, such as keywords, photos you’ve rated highly, pictures taken with a particular camera, or the shutter speed. To create a Smart Album, follow these steps: Below, a Smart Album has been set up seeking pictures taken without a flash at the beach since early 2012. The pictures in the album had to be taken with one of two designated camera models, in this case a Canon or a Sony. The criteria were apparently too taxing, because not one photo in this particular collection matched up. 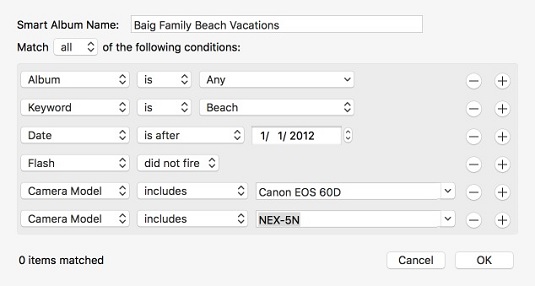 Edward C. Baig is the personal and consumer technology columnist for USA Today, where he reviews the latest gadgets and reports on tech trends.