How RFID Work on Your Raspberry Pi

By: Sean McManus and Mike Cook and
Updated: 11-06-2017
From The Book: Raspberry Pi For Dummies

Explore Book Buy On Amazon
Your Raspberry Pi uses RFID. There are basically three different types of RFID systems available on the market, mainly distinguished by which frequency range they use. All systems consist of two parts: a tag or card and a reader. The reader extracts binary bits from a tag or card using radio waves, so no wires are needed between the reader and the tag or card.

These tags normally known as passive tags — tags that apparently require no source of power — although a small number are active tags that require fitting with a small watch battery. These active tags are used when you need a much longer read range.

Here’s a list of available tags, with their frequency ranges:

Many Raspberry Pi owners use the MIFARE classic card — to give it its Sunday name, the ISO/IEC 14443 A/MIFARE mode protocol. The readers are cheap, and the tags come in various shapes ranging from key fobs to cards. It’s the cards that are most convenient for these projects, but it’s not essential to use these. Here’s the block diagram of what an RFID system looks like electronically.

Block diagram of an RFID system.

The antenna used are formed from coils of very thin wire or even metal foil. Readers for these cards come in all price ranges and interfaces. You can use one of the cheapest — the RFID-RC522 — which can be had for less than $13 for three on popular electronics and auction sites. They’re based on the MFRC522 chip from NXP Semiconductors (formerly Phillips), and though this chip is capable of being connected to a computer in a number of different ways, the way these low-cost boards are designed, they’re restricted to an SPI interface only.

When you get these RFID readers, they come with a choice of two types of header pins. You need to solder on the right-angled pins. Then you can either make up a lead or mount it vertically on a breadboard. 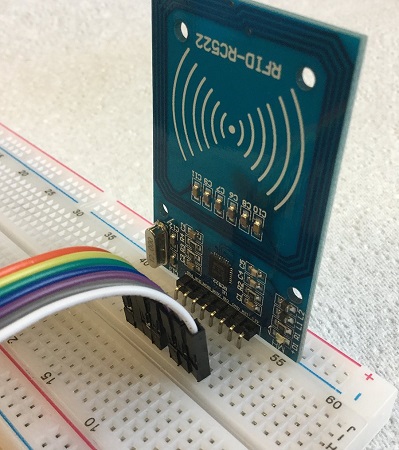 Mounting a reader on a breadboard.

It’s much better to mount it vertically because it’s away from the metal forming the internal clips of the breadboard, and metal affects the resonant frequency of the antenna coil — and thus the tag read range. Here, you see both the schematic and layout diagram of how to wire up the reader to the Raspberry Pi. 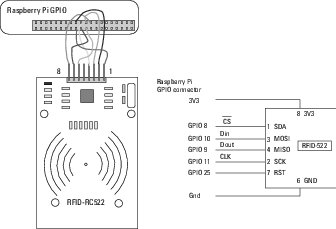 Schematic and layout for attaching to a Pi.

For a really neat job, mount the reader in a wooden or plastic box, preferably using nylon screws because close metal reduces the reading range.

After you attach the reader to the Pi, it’s time to get the software you need to read it. First off, you have to install the python-dev system by typing sudo apt-get install python-dev into a terminal window of a Raspberry Pi connected to the Internet.

There is a fair chance that you have the latest version already installed, but it’s best to check. Next, you need to install the SPI-Py library, which allows you to use the hardware SPI as a C extension for Python. Again in a terminal window, you enter the following:

This installs the code that allows you to use the SPI hardware from both Python 2 and Python 3. Finally, go to the Desktop menu and choose Preferences, then select the Raspberry Pi Configuration application. When the application opens, click on the Interfaces tab and make sure that the SPI interface is enabled. If it isn’t, click to enable it and reboot your Pi.