By: Sean McManus and Mike Cook and
Updated: 09-18-2017
From The Book: Raspberry Pi For Dummies

Explore Book Buy On Amazon
The Raspberry Pi was created partly to inspire the next generation of programmers, and Scratch is the perfect place to start. With it, you can make your own cartoons and games and discover some of the concepts that professional programmers use every day.

Scratch is designed to be approachable for people of all ages. The visual interface makes it easy to see what you can do at any time without having to remember any strange codes, and you can rapidly achieve great results. Scratch comes with a library of images and sounds, so it only takes a few minutes to write your first Scratch program.

There are two versions of Scratch installed in Raspbian: 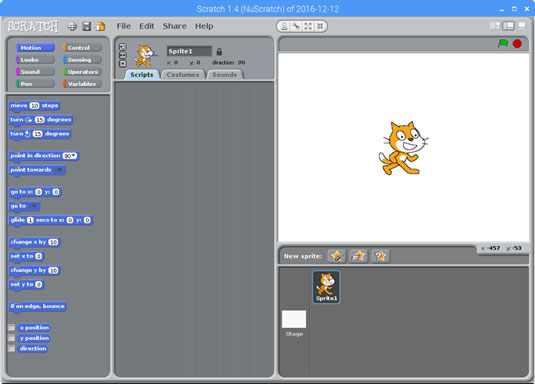 Scratch divides the screen into four main areas. The Stage is where you can see your game or animation take shape. There's a cat on it already, so you can get started straightaway by making it do things, as you see in a minute. In Scratch, the Stage is in the top right, and in Scratch 2, it's in the top left.

Underneath the Stage is your Sprite List. You can think of sprites as the characters in your game. They're images that you can make do things, such as move around or change their appearance. For now, there's just the cat, which has the name Sprite1 in Scratch and Cat1 in Scratch 2.

You create a Scratch program by snapping together blocks, which are short instructions. You find the blocks in the Blocks palette, which is on the left in Scratch and in the middle in Scratch 2. In both cases, it displays the Motion blocks by default. They include instructions to move ten steps, rotate, go to a particular grid reference, and point in a particular direction. 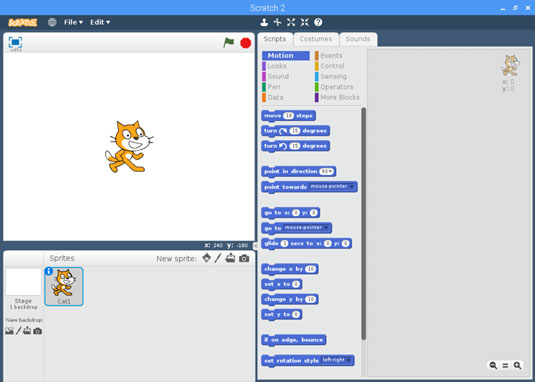 You can make this simple example using either version of Scratch.

To make your sprite move under keyboard control, assemble the program in the following figure. You need to click the Control button above the Blocks Palette to view the yellow blocks, and the Motion button to see the blocks to change the x and y coordinates. The keyboard control block is called When [space] Key Pressed, and you can click where it says [space] to change that to a different key. The movement blocks to change the x and y position have the number 10 in them by default, but you can click in the box and type your chosen number. 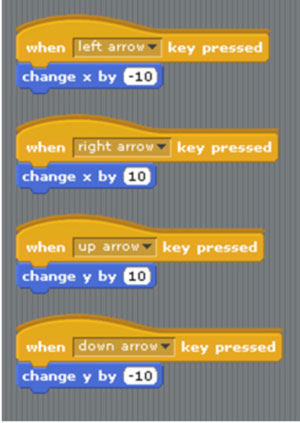 There are three or four New Sprite buttons above the Sprite List. In Scratch, the middle button, which shows a folder on a star, is for choosing a new sprite from a file. In Scratch 2.0, the first button with a spiky-haired character on it is for choosing a new sprite from the library. Click the button and use the file browser to find a ball sprite in the Things folder.

Then add the program in the following figure. 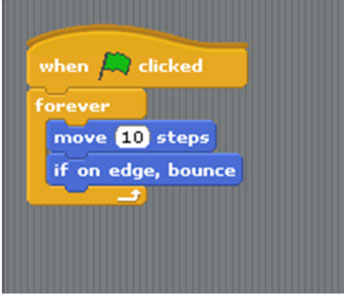 When you click the green flag above the Stage to start your program, the ball will start bouncing from left to right and back again, and you can move the cat to try to cross its path without getting hit. Well done! You’ve made your first simple game!

For more help with Scratch, see the following links: