By: Mathew Brown and Patrick Guthrie and Greg Growden and
Updated: 03-26-2016
From The Book: Rugby For Dummies 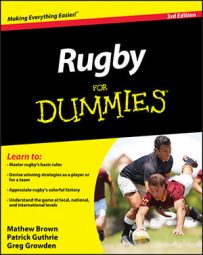 Like most sports that didn’t originate in North America, the game of rugby can be difficult to comprehend at first glance because of the large number of players involved, the seemingly random calls of the referee, and the wide variety of strategies employed by different teams to score points and get wins.

The following sections outline who all the players are, explain what the referee is generally looking for during the rugby match, and spell out the basic skills required to be successful on the pitch.

A rugby team has 15 positions. Each one wears a specific number and has individual responsibilities:

This group is collectively referred to as the pack or the forwards. This group’s main goal is to win possession of the ball. These players are usually the heavyweights of the team, using their bulk and strength to try to overpower their opponents.

A rugby team has another group as well — the backs or back line:

To get a feel for what each player is charged with doing on the rugby pitch, see Chapter 4.

The aim of rugby is to score more points than the opposition. This is done in four different ways:

Mathew Brown is the producer and host of Rugby World on Fox Soccer Plus. Patrick Guthrie is the Director of Broadcast and Sports Development for the City of Glendale, CO. Greg Growden is a rugby correspondent and author of Gold, Mud 'n' Guts.