The Lines and Dimensions of a Basketball Court

Explore Book Buy On Amazon
A basketball court has symmetry; one half of the court is a mirror image of the other. The entire basketball court (see Figure 1) is 94 feet by 50 feet. On each half-court, painted lines show the free throw lane and circle, as well as the three-point arc, whose distance from the basket varies based on the level of hoops being played. 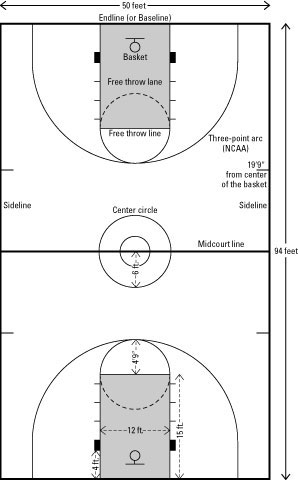 Figure 1: The American court.
Indoor basketball courts are almost always made of hardwood. Outdoor courts are most commonly composed of asphalt.

The borders of the court have their own commonsense names:

The free throw lane is the hub of the action in each half-court. This rectangle is 12 feet wide — 16 feet at the men's pro level. Its length, as measured from the basket to the free throw line, is 15 feet at all levels. An offensive player may not stand inside the lane for more than three seconds unless he or one of his teammates is shooting the ball. After a shot is taken, the count starts over again. A defensive player may remain inside the lane for as long as he desires.

A player fouled by another player sometimes receives free throws, also known as foul shots. She takes these shots (they aren't really "throws") from the free throw line at the end of the lane — 15 feet from the basket. The shots are "free" because a defender does not guard the shooter while she's shooting. When a player shoots a free throw, her feet may not cross the free throw line until the ball hits the rim, or else the shot is nullified.

The remaining players line up alongside the free throw lane (or behind the shooter) and cannot interfere with the shot. They line up in order, on either side of the lane, of defense-offense-defense-offense. (Up to four players may stand on one side of the lane.) If a player opts not to take a spot (say, for example, the second defensive spot), then a player from the opposing team is permitted to step into that spot. The fans behind the basket usually scream, jump up and down, and wave their hands to try to distract an opposing team's shooter during free throws.

Any shot made from beyond this arc — even a desperation half-court shot at the buzzer — is worth three points. A three-point shooter must have both feet behind the arc as he launches this shot, but either foot is allowed to land on the other side of the arc.

The backcourt and frontcourt