How Fantasy Baseball Leagues Are Scored

Each format is scored depending on the league layout. For example, 5x5 leagues will score points or wins/losses on five preselected hitting stats as well as five preselected pitching stats.

The more stats included, the more players’ categories you will have to follow during the season. Some leagues run a 7x7 format, and others might only run a 2x2x2 format including outfield statistics as well.

Know your team format before you try to figure out how to score your players each week! 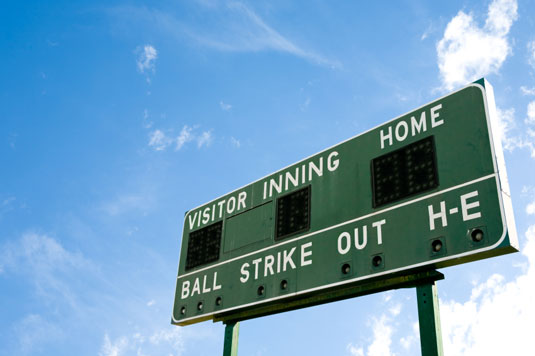 Rotisserie scoring basically tallies a win or a loss for each player in each selected category your league has predetermined. At the end of the season, all the wins and losses are added up, and the person with the best win/loss record wins the league.

For instance, if your league is a 5x5 league (most common), you would follow all 25 players in each 5 pitching and 5 hitting categories for which your league scores points. If one player plays several positions during a game, you must follow and score them accordingly. If the player does better than a previous game in that category, he earns the win; if he does worse, he gets scored a loss.

Keep in mind that some leagues allow different variations of total players — some allow a team of 10 or less to keep the game simple for beginners.

For example, with a 5x5 league that allows 10 players per team (all of which can be scored in all 10 categories), you would have a total of 100 wins/losses at the end of each week. If you have 60 wins and 40 losses, you get only one win point for the week. Toward the end of the season, you do not have to track potentially hundreds or even thousands of points as in Rotisserie or Point System leagues.

If your wins/losses are the same and your team's record is in a “tie” status, the league will either consult a judge to determine the win or loss or will have another stat set aside for such a scenario.

Using the Point System instead of wins/losses

Some leagues use the Point System instead of wins/losses because some avid league members believe that some stats should be worth more than others.

For example, if your team does good in all four categories mentioned, you would get 1 point for runs-scored, 2 points for homeruns, 1 point for walks-allowed, and 2 points for strikeouts — totaling 6 points instead of 4 wins and 0 losses.