How to Take Black-and-White Landscape Photos

Ansel Adams captured wonderful landscapes using black-and-white film. Your camera captures color images, but that doesn’t mean you can’t follow in Ansel’s footsteps and create black-and-white photos. The only difference is that you have to convert your photos to black and white in your digital darkroom. 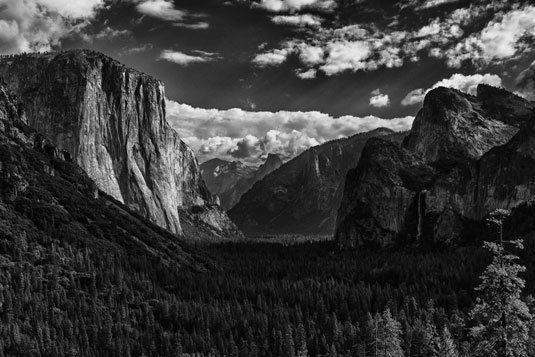 In Photoshop Elements, you can convert an image to grayscale, but you don’t have the control needed to get the rich blacks like those seen in Ansel Adams's photographs. You can get closer using an application like Aperture, Adobe Photoshop Lightroom, or Adobe Photoshop. You also can use third-party plug-ins to convert your color images to black and white. Here are two of them:

If you want to follow in the footsteps of Ansel Adams and create compelling black-and-white photos when you process your images, keep the following in mind: