Removing (Or Creating) Lens Distortion with Your Nikon D3400

Explore Book Buy On Amazon
Certain lenses can produce a type of distortion that causes straight lines to appear curved. Wide-angle lenses, for example, often create barrel distortion, in which objects at the center of a picture appear to be magnified and pushed outward — as if you wrapped the photo around the outside of a barrel. The effect is easy to spot in a rectangular subject like the oil painting shown here.

Notice that in the original image, on the left, the edges of the painting bow slightly outward. Pincushion distortion affects the photo in the opposite way, making center objects appear smaller and farther away.

If you notice either type of distortion, try enabling the Auto Distortion Control option on your Nikon D3400's Shooting menu. This feature attempts to correct distortion as you take the picture. Or you may prefer to wait until after reviewing your photos and then use the Distortion Control tool on the Retouch menu to try to fix things, as done for the image on the right i. Less helpful is a related Retouch menu filter, Fisheye, that creates distortion to replicate the look of a photo taken with a fisheye lens.

With either filter, you lose part of the original image area as a result of the distortion correction, just as you do with the Straighten tool. So if you're shooting a photo that you think may benefit from these filters, frame your subject a little loosely.

If the Auto option is dimmed or you prefer to do the correction on your own, choose Manual and press OK to display the screen shown in the following figure. The scale represents the degree and direction of shift that you're applying. Press the Multi Selector right to reduce barrel distortion; press left to reduce pincushioning. Press OK to make your corrected copy of the photo. 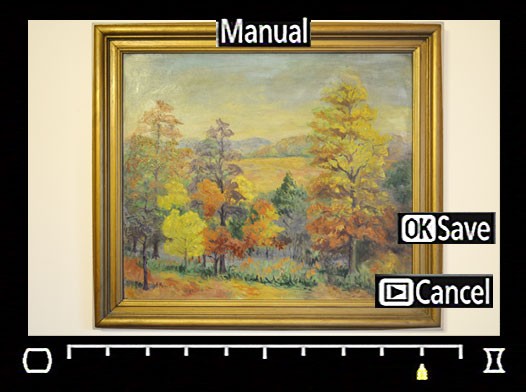 Press the Multi Selector right or left to adjust the correction.