How to Choose an Exposure Metering Mode on Your Nikon D5500 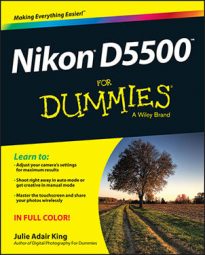 To interpret what the exposure meter tells you, you need to be aware of the current Metering mode on your Nikon D5500, which determines which part of the frame the camera analyzes to calculate exposure. The Metering mode affects the meter reading in M mode as well as the exposure settings that the camera chooses in the fully automatic shooting modes as well as in the P, S, and A modes.

The Information display and Live View screen both contain a symbol representing the current metering mode. You can choose from three modes, described in the following list.

As an example of how Metering mode affects exposure, below is the same image captured in each mode. In the matrix example, the bright background caused the camera to select an exposure that left the statue quite dark. Switching to center‐weighted metering helped somewhat but didn’t quite bring the statue out of the shadows. Spot metering produced the best result as far as the statue goes, although the resulting increase in exposure left the sky a little washed out. 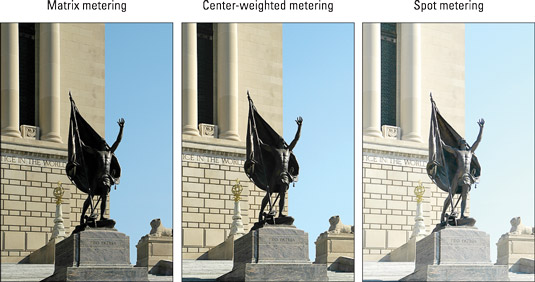 The Metering mode determines which area of the frame the camera considers when calculating exposure.

Matrix metering is the default setting, and you can change the Metering mode only in the P, S, A, and M exposure modes. The only way to adjust the setting is via the Information display or Live View control strip.

You activate the strip by pressing the i button or tapping the i symbol on the monitor.

Change the Metering mode setting via the control strip.

Here’s some advice: Until you’re really comfortable with all the other controls on your camera, just stick with the default setting, which is matrix metering. That mode produces good results in most situations, and after all, you can see in the monitor whether you disagree with how the camera metered or exposed the image and simply reshoot after adjusting the exposure settings to your liking. This option makes the whole Metering mode issue a lot less critical than it is when you shoot with film.

The one exception might be when you’re shooting a series of images in which a significant contrast in lighting exists between subject and background. Then, switching to center‐weighted metering or spot metering may save you the time spent having to adjust the exposure for each image.