Explore Book Buy On Amazon
Often overlooked amidst the more glitzy, whiz-bang options touted in camera magazine and television ads are the ones that affect the quality of the pictures the digital camera can produce. After all, you probably chose a better camera to take better pictures.

Resolution: How many megapixels?

Digital images are made of colored tiles know as pixels. Camera resolution, stated in megapixels (1 million pixels), indicates the maximum number of pixels that it can use to create a photo. 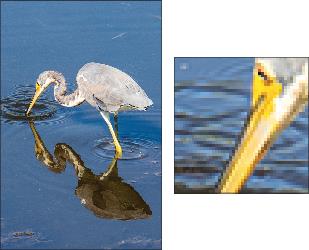 Image resolution determines how large you can print a photo before the individual pixels can be detected.

You need to know these key points:

A photograph is formed when light passes through a lens and strikes a light-sensitive recording medium. In a film camera, the film negative performs the light-recording function. In a digital camera, the image sensor handles the task. The sensor is covered with photosites, which are electronic doodads (that's the technical term) that collect the light data needed to create the image pixels.

Digital-camera image sensors come in two flavors: CCD (charge-coupled device) and CMOS (complementary metal-oxide semiconductor). In the past, each had a reputation for offering different advantages, but today, both are capable of producing excellent images (although techno-geeks still love to argue about which technology is best).

Sensor size, however, is a different story: A smaller sensor usually produces lower image quality than a large sensor. Why? Because when you cram tons of photosites onto a small sensor, you increase the chances of electronic noise that can degrade the picture.

The three largest sensors commonly used in digital cameras have been assigned these monikers:

Which is best — 4:3 or 3:2? Well, there's no magic to either aspect ratio. But 3:2 originals translate perfectly to a 4 x 6 print, and a 4:3 image must be cropped to fit. Mind you, you also need to crop 3:2 originals to print them at other frame sizes — 5 x 7, 8 x 10, and so on. And many cameras enable you to choose from several aspect ratios for your pictures or to crop them to a certain proportion using in-camera editing tools.

If you don't see one of these terms, you can find the sensor's dimensions in the camera's spec sheet. But sometimes, size is presented as a single number, such as 1". In this case, that number reflects the diagonal measure of the sensor, which is the same way that TV sizes are presented.

File format refers to the type of file used to record picture data. The standard format is JPEG (“jay-pegg”), but cameras aimed at intermediate and advanced photographers usually offer a second format called Camera Raw, or just Raw, for short.

When it comes to image quality, Raw outperforms JPEG for reasons. The difference has to do with the fact that JPEG files are compressed to shrink file size, resulting in some data loss.

Pro shooters also prefer Raw to JPEG because Raw can record a greater dynamic range (spectrum of brightness values, from shadows to highlights). Additionally, JPEG files are “processed” in the camera, with characteristics such as contrast, sharpness, and color saturation tweaked to provide what the manufacturer thinks its clients like.

Raw files are just that: uncooked data straight from the image sensor. The photographer then does the work of turning that data into a photo using a software tool known as a Raw converter. This gives the photographer control over the final look of a photo.

This is not to say that you should bypass cameras that offer only JPEG, however. Today's digital cameras produce excellent-quality JPEG images, unlike some of the JPEG-only models of past years.

A digital camera's sensitivity to light is measured in terms of ISO, named for the group that developed the standards for this attribute (International Organization for Standards). Most cameras offer a choice of ISO settings so that you can increase or decrease light sensitivity as needed. In dim lighting, for example, you may need to raise the ISO in order to expose the image.

Being able to increase light sensitivity is great in terms of exposure needs, but there's a tradeoff: As you increase sensitivity, you increase the chances of introducing a defect known as noise, which gives your photo a speckled look. Check out this example, with the noise most evident in the dark background of the picture. Noise is also easier to spot when you enlarge the image, as illustrated by the magnified view. 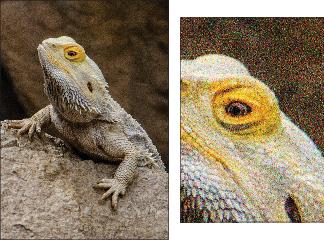 Using a high ISO setting can produce noise, the speckly defect that mars this image.

Today’s cameras are much less noisy than in years past. In fact, if you're using a camera that's more than a couple of years old, better low-light pictures is a perfectly valid reason to justify the purchase of a new model. But because noise levels vary from camera to camera, this is an important characteristic to study when reading camera reviews. Note, however, that a high ISO isn't the only cause of noise; long exposure times also produce noisy images, no matter what ISO setting you use.