This landscape photo was taken in Caspersen Beach in Venice, Florida. This picture was photographed in winter. Winter in Florida is a tough job, but somebody’s got to do it. 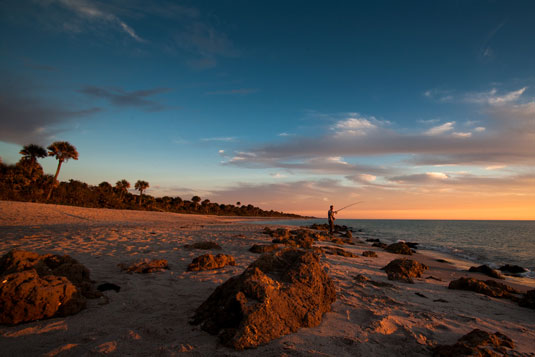 This image was photographed with an extreme wide-angle lens that is the 35mm equivalent of 17mm. A polarizing filter was also used to enhance the clouds and make the sky darker. The photographer surveyed the scene and crouched low to include some big rocks in the foreground. A large object gives the viewer a visual anchor, which is especially important when you take pictures with a super wide-angle lens.

The horizon was placed toward the bottom of the image to draw the viewers’ attention to the sky. A fisherman was also included in the picture for a sense of distance and scale.

The saturation was increased to make the colors pop and minimal cropping was done to tighten the composition of the image.