The fully automatic exposure, point-and-shoot modes of your Nikon D7200 are designed to make picture-taking simple. They prevent you from accessing many of the camera's features. You can't use the White Balance control, for example, to tweak picture colors. Options that are off-limits appear dimmed in the camera menus.

Auto and Auto Flash Off modes

In both modes, the camera analyzes the scene and selects what it considers the most appropriate settings to capture the image. The only difference between the two modes is that Auto Flash Off disables flash. In Auto mode, you can choose from a few Flash modes.

This mode works like Auto except that the camera applies one of seven special effects to the picture.

You can shoot movies as well as still photos in Effects mode. However, you must select the effect you want to use prior to switching the camera to movie-recording mode.

You also get a batch of automatic modes designed to capture specific subjects in ways deemed best according to photography tradition. For example, in Portrait mode, skin tones are manipulated to appear warmer and softer, and the background appears blurry to bring attention to your subject, as shown on the left. In Landscape mode, greens and blues are intensified, and the camera tries to maintain sharpness in both near and distant objects, as shown on the right in the figure. 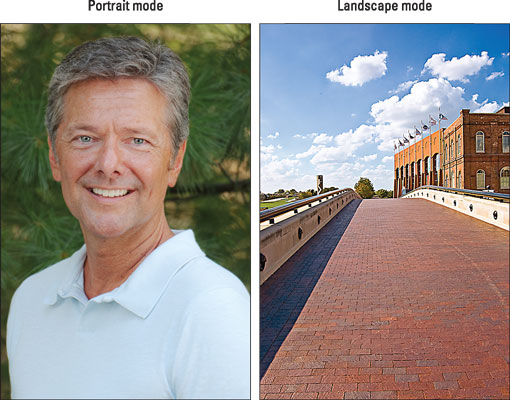 To experiment with Scene modes, set the Mode dial to Scene and press the Info button to display the Information screen. An icon representing the current Scene mode appears in the upper-left corner of the screen, as shown on the left in the following figure. Rotate the Main command dial to shift to the selection screen shown on the right; keep spinning the dial to cycle through the Scene types. To lock in your setting and return to shooting mode, press the shutter button halfway and release it.

After setting the Mode dial to Scene, rotate the Main command dial to scroll through additional Scene types.

While either of the screens shown is displayed, you can press the Help button to view information about the current Scene mode.

The figure shows how things look for viewfinder photography, but you see the same Scene icon and scene-selection screen in Live View mode. However, when the camera is set to movie mode, you can't change the Scene mode. You must flip the switch to the still-camera symbol, change the Scene mode, and then return to movie-recording mode. You also can't display the scene-description Help screens in Live View mode.

For the most part, the process of taking pictures in the Scene modes is the same as for shooting in Auto mode. For a few Scene modes, however, some variations come into play: