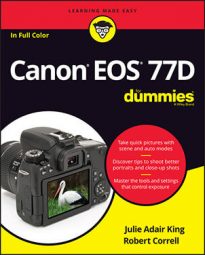 Explore Book Buy On Amazon
Your Canon EOS 77D camera's movie-edit feature makes it possible to remove unwanted material from the beginning or end of a movie. To access the editing tools, set the camera to Playback mode, display the movie file, and then tap the Set symbol or press the Set button to display the controls shown on the left in the following figure.

Select the scissors symbol, labeled Edit in the figure, and press Set. On the next screen (not shown), choose the leftmost icon at the bottom of the screen, which represents the Cut Beginning option. The display then changes to appear as shown on the right, with the Cut Beginning icon highlighted and the other three icons dimmed. The bar at the top of the screen indicates the original movie length.

From the playback screen, select the scissors icon to get to the movie-editing functions.

Advance the movie to reach the first frame you want to keep by rotating the Quick Control dial to the right, pressing the right Quick Control key, or tapping the advance/rewind symbols, labeled in the figure. If you go too far, rotate the Quick Control dial to the left, tap the left arrow, or press the left Quick Control key. Also note that the white bar above the advance/rewind symbols — it represents the entire movie. As you advance the playback, the orange marker moves to the right to show you the position of the current frame. The other marker indicates the endpoint of the movie.

When you reach the first frame you want to keep, press Set. When you do, the four symbols at the bottom of the screen become accessible again. Choose the one marked Save in the figure. You're then given the choice to save the movie as a new file, overwrite the existing file, or cancel the edit altogether. To trim the end of a movie, follow the same process, but choose the Cut End icon instead of the Cut Beginning icon. Now the orange marker indicates the last frame that will appear in the edited movie.