The value at the far right of the viewfinder and lower right of the Shooting Settings display — 40, in Figures 1 and 2 — indicates the number of frames that can fit in the camera’s memory buffer when you use the Continuous Drive modes. For purposes of exposure, don’t worry about it. 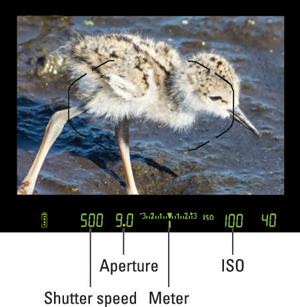 Figure 1: The shutter speed, f-stop, and ISO speed appear in the viewfinder.

Figure 2: You also can view the settings in the Shooting Settings display and LCD panel.

In all exposure modes except B (Bulb), the displays also offer an exposure meter, labeled in Figures 1 and 2. The meter serves different purposes depending on your exposure mode:

In B (Bulb) mode, you see neither the meter nor the shutter speed in the displays. Remember, in this mode, the shutter stays open as long as you hold down the shutter button, so the camera has no idea what shutter speed you’re going to use or how it will affect the exposure. Instead, the shutter speed readout says Bulb, and the elapsed shooting time (in seconds) appears in the area that normally shows the number of shots remaining.

As for the C mode, which is your custom exposure mode, the way the camera behaves depends on which exposure mode you used as the basis for the custom mode.