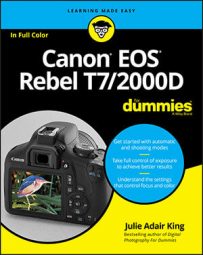 Explore Book Buy On Amazon
To switch to Playback mode on the Canon EOS Rebel T7/2000D, press the Playback button, labeled in the figure. The last photo you took appears onscreen, and you also may see some shooting data. In the figure, for example, the shutter speed and f-stop settings appear in the upper-left corner of the monitor, and the folder number and file number appear in the upper-right corner. 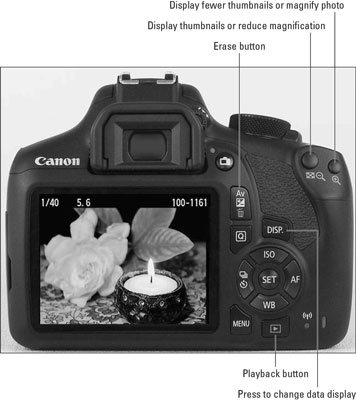 The default Playback mode displays one picture at a time, with minimal picture data.

Several camera buttons come into play when you're viewing images. Note that with the exception of the DISP button, the labels on the buttons are either all blue or partially blue. Canon likes to color-code things, and blue is the color chosen for playback. In the camera menu system, Playback Menus 1 and 2 are decorated in blue as well. (The black-and-white portions of labels refer to shooting functions.)

To skip more quickly through images, rotate the Main dial to enter Jump mode. By default, the camera leaps through photos ten at a time, but you can set up a different system if you prefer.

In Index view, movie files are indicated by borders that look like the sprocket holes in old film reels (labeled a movie file in the figure). To play a movie, you must exit Index view; just press Set to do so. Press Set again to open the movie-playback screen.

You can view four or nine thumbnails at a time.

You also can press the Set button to switch from Index view to single-image view. The image that was highlighted in Index view appears on the monitor after you press Set.

Jumping through images on your Canon EOS Rebel T7/2000D

If your memory card contains scads of images, here’s a trick you’ll love: By using the Jump feature, you can rotate the Main dial to leapfrog through images rather than press the right or left cross key a bazillion times to get to the picture you want to see. You also can search for the first image shot on a specific date, tell the camera to display only movies or only still shots, or display images with a specific star rating.

You can choose from the following Jump options:

You can establish your Jump preference by using the Quick Control screen or Playback Menu 2, as follows:

You can specify a Jump method by using the Quick Control screen.

If you select the Image Rating option, as shown in the figure, rotate the Main dial to set the number of stars that an image must have in order to be displayed. For example, in the figure, I set the option to five stars. Exit the Quick Control screen by pressing the Q button.

Or select the Jump method from Playback Menu 2.

After selecting a Jump method, take the following steps to jump through your photos:

1. Set the camera to display a single photo.

You can use jumping only when viewing a single photo at a time. To leave Index (thumbnails) mode quickly, press the Set button.

The camera jumps to the next image. The number of images you advance, and whether you see movies as well as still photos, depends on the Jump method you select.

If you select any Jump setting but Display Images One by One, a jump bar appears for a few seconds at the bottom of the monitor, indicating the current Jump setting, as. For the Image Rating Jump method, you also see the number of stars you specified.

3. To return to regular Playback mode, press the right or left cross key. 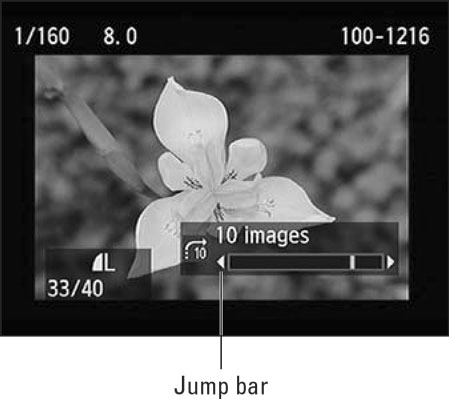 Rotate the Main dial to start jumping through pictures.

When you take a picture, the camera can tag the image file with the camera orientation: that is, whether you held the camera horizontally or vertically. When you view the picture, the camera can read the data and rotate the image so that it appears upright in the monitor, as shown on the left, instead of on its side, as shown on the right. The image is also rotated automatically when you view it in Canon Digital Photo Professional 4, the free photo software available for download from the Canon website. Some other photo viewing programs and apps also can read the rotation data.

By default, the camera tags the photo with the orientation data and rotates the image automatically both on the camera and on your computer screen. But you have other choices, as follows: 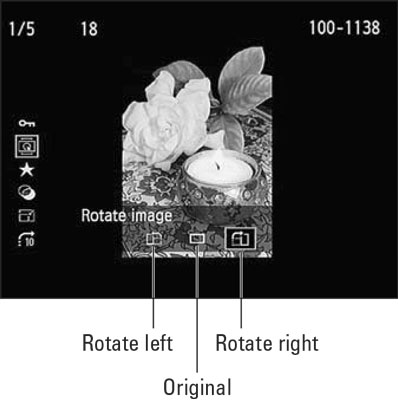 The fastest way to rotate individual images is to use the Quick Control screen (on left).

The Quick Control method does not work if you set the Auto Rotate option on Setup Menu 1 to Off or computer-rotation only. However, you can still rotate pictures via the Rotate Image option on Playback Menu 1, shown on the left.

You also can rotate images via Playback Menu 1.

Choose the menu option and then press Set to display your photos. In Index display mode, use the cross keys to select the image that needs rotating. In full-frame display, just scroll to the photo. Either way, press Set once to rotate the image 90 degrees; press again to rotate 180 additional degrees; press once more to return to 0 degrees, or back where you started. Press Menu to return to the menu system or Playback to return to viewing pictures. The photo remains in its rotated orientation only if the Auto Rotate option is set to the default (rotation on for both computer and camera display).

All these rotation features apply only to still photos; you can’t rotate movies.

During playback, you can magnify a photo to inspect details, as shown. In the example photo, I had to zoom way in to reveal the colorful visitor hanging on my rain chain, apparently searching for a tailor. (Get it? He's missing part of his tail, so he needs a tail … oh never mind. The good news is that his tail will grow back, so you needn't fret for his safety. My sanity is another story.)

After displaying your photo in full-frame view (left), press the Magnify button to zoom in for a closer view (right).

At any rate, you can magnify only photos and only when you’re displaying photos one at a time. So if the camera is in Index display mode, press Set to return to full-frame view. Then use these techniques to adjust the image magnification:

Note the plus sign in the middle of the magnifying glass part of the button icon. That's your reminder to use this button to increase the display magnification.

Julie Adair King is a veteran educator and bestselling author in the field of digital photography. Through her books including Digital Photography For Dummies and several For Dummies guides to dSLR cameras, she has helped readers around the world explore the joy of photography.