How to Choose Flash Modes on a Canon EOS 70D

The built-in flash on your Canon EOS 70D offers an easy, convenient way to add light to a dark scene. Whether you can use flash depends on your exposure mode, as outlined in the next few sections.

Whether flash is available and how much control you have over it depends on the exposure mode. Here's how things shake out:

For exposure modes that allow flash, you can view the current flash setting in the Shooting Settings screen. The figure below shows you how the screen appears in Scene Intelligent Auto mode. 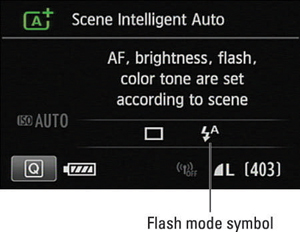 This symbol tells you that the flash is set to Auto mode.

Change the flash setting via the Quick Control screen.

In the advanced exposure modes, you don't choose from the Auto, On, and Off flash modes as you do for some of the automatic shooting modes. Instead, if you want to use the built-in flash, you press the Flash button on the side of the camera. (See the figure below.) The flash pops up and fires on your next shot. Don't want flash? Just close the flash unit. 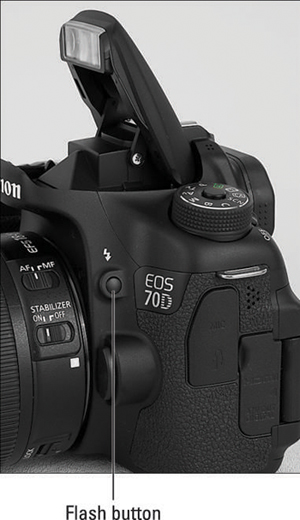 In the advanced exposure modes, press the Flash button to raise the built-in flash.

You do, however, have access to flash options that aren't available in the fully automatic exposure modes. Until you're ready to dig into those features, just make sure that flash firing is enabled. Bring up Shooting Menu 2, select Flash Control, and verify that Flash Firing is set to Enable, as illustrated in the following figure.

Set this option to Enable for normal flash firing in the advanced exposure modes.

For any exposure mode that permits flash, you can enable a Red-Eye Reduction feature. When you turn on this feature, the Red-Eye Reduction lamp on the front of the camera lights when you press the shutter button halfway. The light constricts the subject's pupils, which helps reduce the chances of red-eye. The flash fires when you press the shutter button the rest of the way. Turn the feature on and off via Shooting Menu 2, as shown in the figure below. 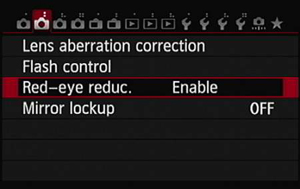 The viewfinder, LCD panel, and Shooting Settings display don't offer any indication that Red-Eye Reduction is enabled. However, the Camera Settings screen displays a little eyeball icon and the word Enable or Disable. To display the screen, press the Info button until it appears.

After you press the shutter button halfway in Red-Eye Reduction flash mode, a row of vertical bars appears in the center of the viewfinder data display. A few moments later, the bars turn off one by one. For best results, wait until all the bars are off to take the picture. (The delay gives the subject's pupils time to constrict in response to the Red-Eye Reduction lamp.) In addition, when you use the default autofocusing settings, the built-in flash may pulse briefly to help the camera find its focusing target; you can disable this feature via the AF-Assist Beam Firing option, found in the Autofocus Custom Functions category.