When you capture photos on your Nikon D3300 using the JPEG Image Quality settings (Fine, Normal, or Basic), colors are also affected by the Picture Control setting. This option affects other picture characteristics that the camera tweaks when you shoot in the JPEG format, including contrast and sharpening.

Sharpening is a software process that boosts contrast to create the illusion of slightly sharper focus. Sharpening produces a subtle tweak; it’s not a fix for poor focus.

The camera offers the following Picture Controls, represented on the menu and in the displays by the two-letter codes labeled in this figure:

The extent to which Picture Controls affect an image depends on the subject, but this figure gives you a general idea of what to expect. As you can see, the differences are subtle, with the exception of the Monochrome setting. 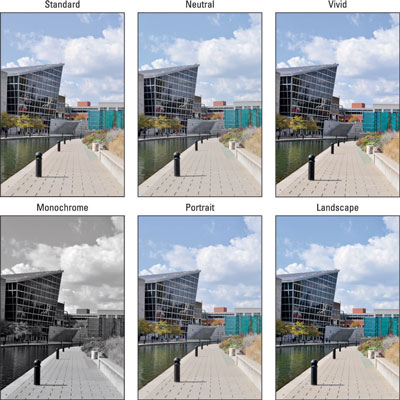 Picture controls apply preset adjustments to color, sharpening, and contrast to images you shoot in the JPEG file format.

While you’re new to the camera, try sticking with the default Picture Control setting (Standard), for two reasons. First, you have more important settings to worry about — aperture, shutter speed, autofocus, and all the rest.

Why add one more setting to the list, especially when the impact of changing it is minimal? Second, if you really want to mess with the characteristics that the Picture Control setting affects, you’re better off shooting in the Raw (NEF) format and then making those adjustments as you process your Raw images.

The camera tags the Raw file with whatever Picture Control is active when you take the shot, and that tag is used to render the image during playback. But the adjustments are in no way set in stone — you can manipulate your photo at will during the image-processing stage.

Julie Adair King has been covering digital photography for over two decades. Along with the seven editions of Digital Photography For Dummies, Julie has also written For Dummies guides covering specific SLR cameras.