What Is a Ferret?

Explore Book Buy On Amazon
Although ferrets may look rodent-like with their long, pointed snouts and ticklish whiskers, they’re not rodents at all. Ferrets come from the order Carnivora, which simply means “meat or flesh eating.” This order encompasses a huge group of animals, from Fifi the common lap dog to the mighty African lion. Within the order Carnivora, ferrets belong to the family Mustelidae, which they proudly share with such bold critters as the badger, wolverine, pine marten, and otters. Included in that family are both domesticated ferrets and ferret-like wild animals such as the weasel, European polecat, steppe polecat, black-footed ferret, and mink. 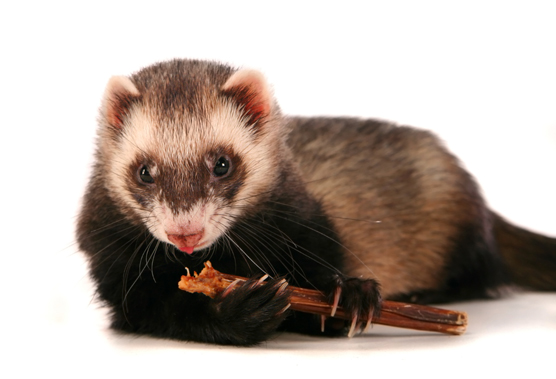 © Rosa Jay / Shutterstock.com
They may look like rodents, but ferrets are actually carnivores.

The word ferret is appropriately derived from the Latin word Furonem, which means “thief.” As a new ferret owner, you’ll quickly realize just how thieving your new family member can be. As cute as this endearing trait may be at times, it has its downsides. It once took me over a day to find all the contents of my purse, which I foolishly left open in the presence of roving ferrets.

Many ferret owners call their pets a variety of nicknames. Some of the names used to describe a ferret are carpet shark, fuzzy, snorkeler, furball, and fuzzbutt. I know that many more terms of endearment exist out there. Don’t get confused!

Before you bring a new fuzzy home or in the early stages of your ferret parenthood, you need to become familiar with a ferret’s physical inventory. When I say physical, I pretty much mean all the general stuff regarding a ferret’s physical characteristics, from his paws and claws to his weight and remarkable (and not-so-remarkable) senses.

Looking at the life span of a ferret

Since publishing the second edition of Ferrets For Dummies in 2007, I would have expected the six-to-eight-year lifespan of ferrets to have increased, yet I find it has stayed the same or even decreased slightly. Although I’ve still heard many stories of ferrets that have lived for up to nine or ten years, barring any unforeseen mishaps, my belief remains that a ferret’s environment — his caging, disease, stress (including overcrowding), diet, and so on — plays a role in his short lifespan. As ferret owners discover more about the ferret and realize how important husbandry and the reduction of stress are, they might possibly see that increase in ferret lifespan within their own lifetime.

For now, though, you can only do your best to make your ferret’s quality of life top-notch. At 1 year old, your fuzzy is considered full grown. At 3 to 4, he’s considered middle-aged, and at 5 to 6 years of age, he’s considered a geriatric, or an old fert! At this time, she may begin to slowly lose weight and start encountering debilitating illnesses. This is when things get tough and you’re faced with difficult choices.

As heartbreaking as it is, ferrets are prone to many diseases and may be genetically or medically flawed. Like most companion pets, whose life spans are short compared to humans, ferrets’ lives are compacted into only six to eight oh-so-short years. The average human has 65 to 70 years to experience what a ferret experiences in under a decade. The ferret is an amazing trooper with a tremendous fight for life, and you can certainly do your part to help.

A carpet shark’s size makes him an ideal pet for both the apartment dweller and the homeowner. As is the case with some mammal species, unneutered male ferrets typically measure up to two times larger than females — called sexual dimorphism. There is a notable weight difference in the head and torso, where the male is wider and less dainty.

Ferrets are kind of like humans in that they tend to bulk up in the winter. Sometimes ferrets gain 40 percent of their weight at this time of the year and then lose it in the spring (as do humans, right?). This isn’t always the rule, though; some ferrets always seem skinny, and others are belly draggers all year round. Could it have something to do with health and/or exercise? Better check it out.

Getting to the point about claws and teeth

On each of a ferret’s soft paws is a set of five non-retractable claws or nails designed for digging and grasping. Nature designed the nails to stay there for a ferret’s benefit and survival, so you should never remove them. Frequent clipping, about every 7–10 days, is recommended.

Declawing your ferret is a big, fat no-no. For a ferret, declawing is a painful, mutilating surgery with way more risks than benefits. They need their claws for digging, grasping, walking, and playing. The base of the claw gives the ferret’s foot added strength to support his weight. Removing the claws causes foot problems and/or pain when walking. If you think you’ll be too lazy to clip your ferret’s nails, you must recognize that a ferret isn’t the pet for you.

Like all carnivores, ferrets have large canine teeth that can be rather intimidating. A ferret’s teeth usually hang lower than his lip flap and are in full view. Although any animal with a mouth can and will bite under certain circumstances, I’ve found the biting ferret to be the exception rather than the rule. Most ferrets use their canine teeth to show off to their friends and to eat. When a ferret nips, she does it out of fear or play. An occasional warning nip may be a sign of the ferret’s disapproval of one thing or another.

In this day and age, you would be hard pressed to find a veterinarian who would ethically lean on the side of declawing or defanging a ferret anyway. And many U.S. and European governmental authorities have actually banned these mutilating practices on all animals.

Make no doubt about it, the bite of a disgruntled ferret is painful and can draw blood. Take measures to make sure bites don’t happen, and unless medically warranted for your ferret’s health, don’t alter his canine teeth; leave them right where they belong.

A ferret’s senses vary in degree of acuteness. Like human infants, a ferret’s eyesight isn’t that well-developed, and his ability to distinguish color is limited. A ferret can only see some reds and blues. Make no mistake about it, though: Even the most restricted ferret can and will find any object he wasn’t intended to find (and his stubby little legs will help him steal the objects back to his hidey-hole). In a sense, all ferrets have sticky fingers: If they find it, it belongs to them. If they want it, it’s theirs. You get the idea.

A ferret’s sense of smell is far superior to a human’s, and his little paw pads are more sensitive to the touch. Also, a fuzzy’s sense of hearing is remarkable. If you open a bag of chips, for example, be assured that your ferret on the other side of your house will hear the bag opening and come a-begging. So, remember to whisper when discussing sensitive issues such as neutering or going on vacation.

Kim Schilling is the founder of Animals for Awareness, a non-profit USDA licensed sanctuary dedicated to the needs of exotic and wild animals. When she discovered domesticated ferrets some 30 years ago, she never looked back. Kim wrote both previous editions of this book and has shared her home with as many as 20 ferrets at once.