From Birth to Bundle of Energy: Ferret Life Stages

Explore Book Buy On Amazon
If you make it through the ferret pregnancy and birthing ordeal—hey, it’s stressful for all involved—you may be fortunate enough to watch a kit (baby ferret) or two grow up. Healthy kits grow rapidly, both physically and emotionally. It won’t be long before you’re wiping away the tears in your eyes as you proclaim, “It seems like only yesterday Scooter was covered with newborn fuzz!”

This article takes you step by step through the developmental stages of carpet sharks—our fuzzy ferret friends. Some stages aren’t too pleasant, but they’ll only be temporary if you do your part as a good fuzzy human. From physical changes to behavioral changes, I'll tell you what to expect every step of the way and how to handle the changes to produce happy and healthy ferrets. However, keep this in mind: When it comes to fuzzbutts, nothing is set in stone!

Kits are born into the world completely helpless and dependent on their mothers for survival. Their eyes and ears are sealed shut, rendering them blind and deaf. A small layer of fuzz covers their tiny bodies, which are smaller than a normal tube of lipstick. Newborns typically weigh in at a whopping 6 to 12 grams. Most kits are born without any teeth, although baby incisors usually appear by day ten.

Healthy newborn kits have only two goals: getting food and keeping warm. Immediately after birth, they’ll latch onto one of mom’s nipples if allowed and remain there for a long period of time, gorging themselves on rich milk. Adequately fed newborns should gain between 2 1⁄2–3 grams per day during their first week of life, doubling their birth weight by day five. Despite having just been squeezed through the birth canal and dropped into the cold world, newborn ferrets are active and mobile, although they have nowhere to go just yet. They explore their nest a tiny bit and start to develop the little muscles in their legs. They’re able to recognize mom and siblings through smell. During the first few weeks, however, the young kits need to be stimulated by mama fuzzy to go to the bathroom. 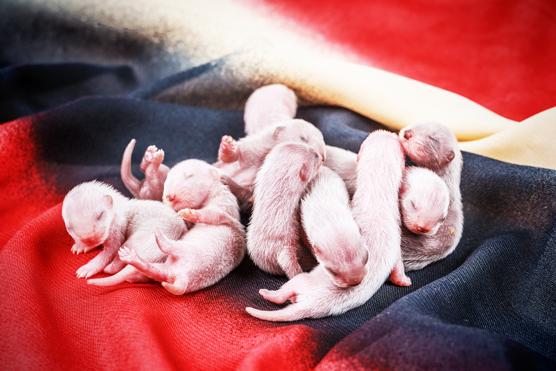 © Rashid Valitov / Shutterstock.com
Ferret kits aren’t much bigger than a tube of lipstick.

During the second week of life, kits should gain about 4 grams per day. By 10 days old, they should’ve tripled their birth weight and should average about 30 grams. During the third week, the daily weight gain should be about 6 grams. And by 3 weeks old, your kits should be at least ten times heavier than when they were born.

At three weeks, the males and females are easier to tell apart (without cheating and turning them over). Females are daintier and have narrower heads. Boys are butterballs with their wide heads and stockier builds.

Even though fuzzies are born with their eyes closed, you can tell which ones are albinos because the color of their eyes shows through their thin skin. If you can’t see dark color behind a fuzzy’s semitransparent eyelids, you know you have a bouncing baby albino.

Kits that hit 3 weeks of age are working to rapidly develop their nest legs as they boldly explore their environment. Mom is still a part of their lives, keeping a close eye on kits that may wander too far away. Although the kits still rely on mom for the majority of their nourishment, natural weaning should begin at this age. The baby canine teeth and some baby premolars are beginning to erupt, and permanent incisor teeth are breaking through and pushing the baby incisors out. You can offer these kits a soft mush or canned food a few times a day.

Weaning doesn’t involve caging mom and plopping down a crock of odd-smelling mush in front of your confused kits. Weaning is a gradual process that should begin at the age of 3 weeks and be completed at around 6 weeks. Kits need time to adapt to the nutritional change. To wean effectively, first familiarize yourself with diet information. This is imperative, because you need to understand proper ferret nutrition.

Starting out with canned food or a soft mush made with moistened kibble is only one way to start your babies. As kits get older, you should offer a variety of other foods, such as chicken and beef (either raw or cooked). A change of kibble and canned food is recommended. This is also the time to introduce small mice and insects if desired. The more variety offered, the better. The weaning process is messy as the kits delve face first into their food, but it’s a relatively easy process. During these three weeks, the kits will naturally begin to rely less and less on mom and start to prefer the replacement diet you offer.

The fourth week is somewhat of a turning point in a kit’s new life. His eyes and ears begin to show signs of opening up to the world. His soft, white fuzz should start taking on some color and pattern, giving you a glimpse into his future. More baby premolars also start to erupt around this time. Healthy kits should be eager to dive into the bowl of soft mush you provide and stuff themselves while still taking advantage of mom’s milk supply. And although mom may still want to remind the kits to go to the bathroom, the kits should show signs of being the self-proficient poopers that their parents are!

By week five, a kit’s eyes and ears have opened and he’s ready to get into trouble! Kits at this age are extremely active and are starting to rough and tumble with their siblings. By week six, the kits should start eating more soft food and start relying less and less on mom for nutritional support. Some breeders introduce the dreaded first distemper vaccination at this age.

The terrible fuzzy twos: 6 to 10 weeks

Emotionally, at 6 to 7 weeks old, furball kits should be spending a lot of awake time playing mock-combat with their siblings. This play is important in developing hierarchy among the youngsters and preparing them for their futures as possible top furballs in their new homes!

At around seven weeks, ferrets should quit hanging on mom so much and start relying almost completely on the soft food you serve. Permanent canines are pushing through their sensitive gums, sometimes erupting just beside the baby canines. This is a pretty painful ordeal to the small fuzzbutt and can cause him to wallow in the throes of teething behavior. It isn’t unusual to have kits with canine teeth side by side for several days until their baby canines finally fall out.

At 8 weeks old, kits should have four permanent canine teeth. They’re now capable of eating the hard kibble that most other ferrets rely on. A kit should have a well-developed and varied diet by now, but if you haven’t started this process yet, now is the time to introduce him to new tastes and smells. Babies are so impressionable!

Many private breeders begin to let their kits go to their new humans at around the age of 10 weeks. Babies are usually using the litter box by now, and drinking from the water bottle comes easily. Some breeders, however, wait as long as 12 weeks before letting their babies go. The decision is up to the breeder and may be based on how comfortable he or she is with the person buying the ferret. Or it may just be based on personal policy. Whatever the case, there’s really no disadvantage to waiting the extra four weeks for your youngster, other than possibly being a bit delayed in getting him on a varied diet.

For those kits that received their first distemper shots at 6 weeks old, 9 weeks of age is the perfect time for the second attack on their heinies.

Kits in the 6- to 10-week age range are extremely active in testing their humans to the limits. This age range is the critical training period, which many ferret humans fail to recognize. You need to handle your furkids frequently and gently. They need consistency and someone who’s willing to teach them what is and isn’t acceptable behavior. Because many kits arrive at pet shops at this age, they frequently don’t receive the proper human guidance. Many of these toddlers become troubled teenagers for their unsuspecting humans. Therefore, as a responsible ferret breeder, you need to begin training as early as possible.

Your kits should have almost all their permanent teeth by 10 weeks of age. The little indentations on your fingers and arms are proof enough! Kidding aside, if your kits received the proper fuzzy guidance during their terrible twos stage, adolescence shouldn’t be too bad.

By 3 months old (12 weeks), well-adjusted kits are discovering that humans can be fun companions. Although the activity level of kits this age still far surpasses the average human’s energy levels (even with a double espresso), kits do begin to mellow a little bit (emphasis on a little bit). Ferret personalities become well-formed and defined during adolescence. Even though these kits are still highly influenced by the humans who interact with them, it’s relatively easy to pick out the alpha males and females (top furballs) by watching them interact with their siblings and humans.

Kim Schilling is the founder of Animals for Awareness, a non-profit USDA licensed sanctuary dedicated to the needs of exotic and wild animals. When she discovered domesticated ferrets some 30 years ago, she never looked back. Kim wrote both previous editions of this book and has shared her home with as many as 20 ferrets at once.