Explore Book Buy On Amazon
As the owner of a breed subject to so much discrimination, you have a special obligation to make sure your Pit Bull is a walking example of why this breed can be so great. More than most dogs, Pit Bulls attract attention—good and bad—wherever they go. That means you have a ready-made audience. Make the most of your time in the spotlight by showing the Pit Bull in a good light. 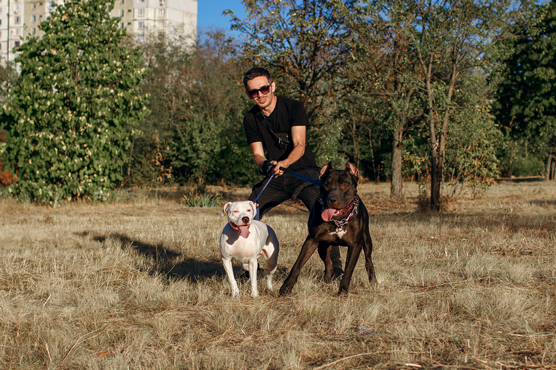 No other breed has so much misinformation buzzing around it as the Pit Bull does. Countless websites and social media groups claim that Pit Bulls are “nanny dogs,” misidentified as the culprits in attacks, and vilified for the slightest misdeeds. Other groups call Pit Bulls maulers (and a host of other words my publisher won’t allow me to include here). Neither side is right nor wrong.

The fact that you’re reading this article probably means you’re a Pit Bull lover, so you’re more likely to be swayed by the group that fervently believes Pit Bulls are the victims of discrimination. But that group is also one of the greatest victims of Pit Bull attacks — because they refuse to see that there is the potential — not the promise, but the potential — that this dear family member could one day answer to his heritage and inflict serious injuries to people or pets.

My plea is this: Listen to both sides. Realize that this issue is not black and white. (It isn’t even gray. It’s more like a marble design, with swirls of truth running throughout both sides.) And act accordingly. Take the extra precautions that old time dogmen took because they realized the potential for danger. Don’t give your dog a chance to be a statistic simply because you trusted too much. Be a loving—but careful—custodian who doesn’t set your dog up for failure, and in so doing, doesn’t bring even more bad attention to the breed.

If you have a Pit Bull who is a great example of what the breed can be, show him off! Train for or enter any competitions: weight-pulling, agility, dock diving, obedience, rally, tracking, scent work, barn hunt, trick dog, canine good citizen. If your Pit Bull performs with typical Bully enthusiasm, you can be sure she’ll be making a good impression on everyone there!

Many people will be uneasy having your Pit Bull around their child or pet. Don’t blame them for these feelings. Instead, try to understand that, statistically, they have cause for concern. Your job is to set their fears at ease, not confront or antagonize them. Keep your dog on a sturdy leash in public, close to your side, and don’t allow him to stare at or threaten other people or pets. I know, I know: Your Pit Bull is a sweetheart. But they don’t know that. Prove them wrong. Don’t feed into the stereotype of the inconsiderate Pit Bull owner.

Steer your dog away from trouble

Don’t set your dog up for failure. Dog parks are generally just too exciting to take a chance on going. But if you see out-of-control dogs anywhere, just leave. Don’t give them the chance to start something with your dog. Your dog may not be the one to start it, but he may be the one to finish it — and get the blame for the whole thing.

Every day, I see pleas from Pit Bull owners who can’t keep their dogs. They deeply love their dogs, but they can’t keep them because they’ve killed another family pet or threatened their children. They try to find a home without pets or kids, but that’s not easy, and it also doesn’t protect future neighborhood pets and kids. Some owners, upon realizing there are no takers, decide not to mention their dogs’ problems, perhaps in the hopes that the dog will somehow be less aggressive in a new home. The situation is horribly tragic, but placing a potentially dangerous dog where he could injure anyone—human or animal—is not an option.

Although Pit Bulls have a higher chance of inflicting severe injury than other breeds do, most Pit Bulls spend their entire lives biting nothing but their dinners! Being aware and careful is not the same as being scared. Have fun with your Pit Bull—there’s a reason Pit Bulls are so popular, and it’s because most of them are good, and when they are good, they’re very good!

No machine has been developed that can outperform a dog’s nose in olfactory detection or that can outperform a dog when it comes to finding buried, lost, or even dead people. Not every dog is up to the challenge, however. To be a Search and Rescue dog, not only must a dog have a good nose, but he must also be courageous, strong, nimble, obedient, intelligent, enthusiastic, and tough. This sounds like a job for a Pit Bull!

Sometimes it’s difficult to lead your own private crusade, but there’s strength in numbers — and few things are stronger than a group of determined Pit Bull owners. Your group can organize competitions and perhaps even hold sanctioned events under the auspices of the ADBA, UKC, or AKC; you may also conduct Canine Good Citizen tests or Temperament Tests.

All your good deeds will be undone if uneducated or uncaring Pit Bull owners let their dogs run amuck. It’s difficult to be a one-person crusade, but you may have to show these people the light in order to make the world a better place for Pit Bulls in general and your dog in particular. Perhaps you could write a dog care column for your local paper. Publicize cases of Pit Bull heroism and good deeds. You could volunteer at the local Humane Society and take special care to educate Pit Bull adopters. You could call up classifieds in the paper advertising Pit Bulls and make yourself available to these people or to their puppy buyers for advice. You could pass out Pit Bull information at dog events. Make yourself known in your community as a dedicated and responsible dog owner and lover. Make it difficult for community leaders to say anything bad about Pit Bull owners, because they will think of you first. Remember that your Pit Bull is the best ambassador for the breed you have, but you have to be his PR agent.

Perhaps being in the public spotlight just isn’t for you. You can still do your part by joining a national or international group that fights for dog rights. You can contribute your time, money, or expertise to end dog fighting and animal abuse and fight breed-specific legislation or unjust laws. Dog fighting gives the Pit Bull a bad public image; many other ways exist to test this breed’s gameness that don’t involve cruel practices or illegal venues.

Animal abuse occurs everywhere. It’s just as bad if it happens to a mixed breed as to a Pit Bull. Become involved in stopping it, not only because it’s the humane thing to do, but because as a Pit Bull owner you have the chance to show that Pit Bull owners care about humane animal care.

Fight unjust laws no matter where they are or if they affect you or not. Every unfair law that goes unchallenged in another community helps your community leaders to justify passing the same laws where you live. Help people in other communities fight their battles, and they will be there for you. The following organizations may be of help: