How to Prevent Carbon-Monoxide Build-Up in Your Home

By: James Carey and Morris Carey and
Updated: 03-26-2016
From The Book: Home Maintenance For Dummies 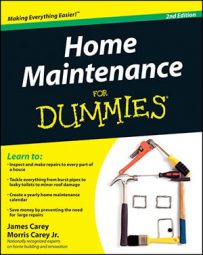 You want to avoid carbon monoxide (CO) build-up in your home. CO is the number-one cause of poisoning deaths in the United States. It's an invisible, odorless, poisonous gas produced by the incomplete combustion of any fuel — such as gasoline, kerosene, propane, natural gas, oil, and even wood fires. CO in your home can be fatal, killing in minutes or hours, depending on the level of CO in the air. At low concentrations, CO produces a wide range of flu-like symptoms, including shortness of breath, mild nausea, and mild headache. At moderate concentrations, the symptoms are headache, dizziness, nausea, and light-headedness. At high concentrations, the “symptoms” are unconsciousness and death.

One telltale sign of mild CO poisoning is flu symptoms that go away when you’re outside the home in fresh air.

The typical sources of CO in homes are malfunctioning gas furnaces, gas stoves, water heaters, clothes dryers, and even improperly vented fireplaces. Other major dangers include using a gasoline-powered generator in or too near the home, using a barbecue unit indoors (or in the garage) to cook or heat during a power outage, and letting a car run in the garage or carport where exhaust fumes can collect and enter the home. Making matters worse, many of today’s energy-efficient homes minimize outside air exchange and cross-ventilation, giving CO no chance to exit once it enters the home.

CO wafts through a room like perfume — only you can’t smell or see it — which is why having a working CO detector in your home is critical. If you don’t already have a CO detector, you should buy one. The Consumer Product Safety Commission (CPSC) recommends that every home with fuel-burning appliances of any kind be equipped with a least one CO detector. Place your CO detectors anywhere from 14 inches above the floor to eye level, and never where there is a draft (such as near a window, doorway, or stairwell).

If you have only one unit, place it in the hall outside the bedroom area of your home. Invisible, odorless, poisonous CO in concentrated form is far less likely to awaken someone who’s sleeping than thick, toxic smoke is.

CO detectors can be battery operated, hard-wired, mounted directly in an electrical wall outlet, or plugged in to an electrical cord (which allows units to sit on a shelf or tabletop). If you use a unit that plugs in to a direct power source, make sure it also has an independent battery backup.

Your CO detector should have a digital display with memory that indicates and records a problem, even when it’s too small to trigger the alarm. A normal low level of CO in a home is zero. Nada, zilch, zip. Even a small reading — such as 25, 30, or 35 parts per million — indicates a problem that could escalate.

Because you can’t test a carbon-monoxide detector using an outside source (the way you can light some matches under a smoke detector to see if it’s working), you have to remember to press the test button on the CO detector once each month to make sure the detector is working.

Don’t mess around with CO. Once a year, have your heating system, vents, chimney, and flue inspected (and cleaned if necessary) by a qualified technician. And make sure that your fuel-burning appliances always are vented.

Other maintenance procedures should include checking and correcting any signs that indicate potential CO problems, including

James Carey and Morris Carey Jr. share their 55+ years of experience as award-winning, licensed contractors with millions of people nationwide through a weekly radio program and syndicated newspaper column, both titled On The House. They also appear regularly on CBS News Saturday Morning.