By: Katharine Kaye McMillan and Patricia Hart McMillan and
Updated: 04-20-2022
From The Book: Home Decorating For Dummies 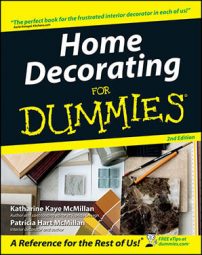 Explore Book Buy On Amazon
Refurbished furniture can add a lot of character to your home. Decorating old or unfinished furniture lets you make a creative statement. Take a look at the following decorating tips. Try some out on your furniture: