By: David Daniel Kennedy and Grandmaster Lin Yun and
Updated: 04-06-2022
From The Book: Feng Shui For Dummies, 2nd Edition

Explore Book Buy On Amazon
An ancient Chinese art, Feng Shui empowers you to improve every aspect of your life, from your health and wealth to your relationships and career. How does Feng Shui work? It enhances your environment according to principles of harmony and energy flow. Whether you’re aware of it or not, your environment — and your relationship with it — are constantly affecting you. Consequently, your best bet for a healthy, happy, and successful life is to make your environment work for you through the practice of Feng Shui. 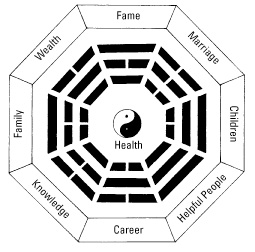 A colored object placed within the Life Area (of your space) associated with that color can help energize that space. By placing the Feng Shui Octagon, a tool for mapping the energies of a home or lot, over your lot plan or a floor plan of your home (starting with the first floor and then moving to any additional floors), you can figure out which parts of your home fall in which Life Areas and cure them with an appropriately colored object.From painting the walls yellow in the Health Area of your home (for better health and physical well-being) to positioning a healthy green plant in the Family Area of your home or lot (to encourage unity and a stronger family bond), Feng Shui encourages the use of color to enhance your life energy. The following table shows you how to apply color to magnify the energy of each Life Area.

How to see immediate home improvement through Feng Shui

If you’re looking to make some quick improvements to the environment in your home, the following list of practical Feng Shui cures is at your service:

David Daniel Kennedy is a leading expert on Feng Shui. He is the author of three books on the subject, as well as a self-directed course. Kennedy learned Feng Shui directly from "founding father" Lin Yun, and he excels at translating the art of Feng Shui into simple, practical actions you can use to transform your life. Learn more at fengshuicommunity.com. Grandmaster Lin Yun founded two Buddhist temples in the United States. His most notable achievement, on a long list of awards and accomplishments, was bringing Black Sect Buddhism, and especially his Feng Shui teachings, into mainstream western society. He died in 2010.