How to Prevent and Deal with Scurs after Disbudding a Goat

Explore Book Buy On Amazon
Removing the horns from a baby goat is called disbudding, or dehorning. The process of disbudding a kid (baby goat) burns through the skin and horn bud, stopping the blood supply to the horn buds and causing them to eventually fall off, if all goes well. If they do grow back, the partial horns are called scurs. 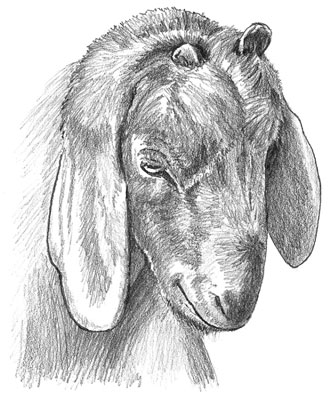 Horns that regrow after disbudding are called scurs.
The horns can regrow, particularly in bucks, if they are not disbudded early enough or well enough. Because the horn grows wider at the base as the kid grows, and the growth is faster in bucks, getting all of it can be challenging. Some people burn a circle eight, or two circles, at the time of disbudding to prevent scurs.

Check for regrowth a few weeks after disbudding and re-burn if you see a problem developing.

In many cases, scurs start growing long after the kid is too large to fit in a kid box or handle easily. In those cases, you can just let the scurs grow. During breeding seasons, the bucks often knock these scurs off while fighting.

Unless they grow exceptionally large, scurs aren't usually a big problem. They may cause a lot of bleeding when they break off. In those cases, just spray the area with Blu-Kote to help prevent infection and keep an eye on it.

Exceptionally large scurs can lead to standard problems common with horned goats: they can be a danger to humans and other goats. Another problem is that a scur can grow toward the goat's eye. You can pad it and prevent problems by cutting a kid's "water noodle" (used for swimming) into a short piece and gluing it around the scur to hold it out of his eye. In some cases you may need to have your veterinarian cut part of it off every so often.

If the damage from a broken scur is extensive, or if the bleeding won't stop, you should cauterize it with a disbudding iron or contact a vet.