How to Control External Parasites on Your Goats

Explore Book Buy On Amazon
A green lifestyle that includes goats doesn't mean you have to live with ticks, mites, and fleas. External parasites are often just an annoyance, but they can lead to bacterial infections of the skin. You can prevent such infections by routine grooming, avoiding indoor overcrowding of your goats, and identifying and treating infestations early.

Goats can get two kinds of lice: sucking lice and biting lice. Biting lice eat dead skin cells on the goats and make them itch. Sucking lice are more serious — they not only cause itching, but they suck the goats' blood, which can lead to anemia.

Lice tend to take up residence on a goat in winter months. You can usually tell that a goat has lice because it shows signs of itching. Its coat may begin to look rough, and the goat will rub on fences (more than usual), have dandruff, lose patches of hair, and chew on itself.

You can see the lice or their grayish eggs (called nits) by inspecting the top of the goat's back with a magnifying glass. You need a microscope to determine whether you're dealing with sucking or biting lice. Sucking lice have narrower heads, and biting lice have wide heads. 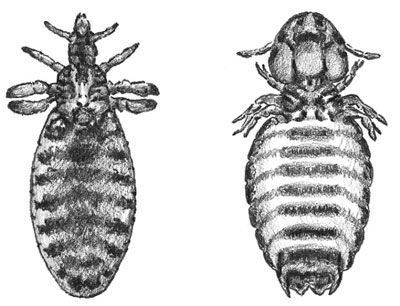 For more severe infestations, treat goats twice over a two-week period using an insecticide dust such as Co-Ral or a pour-on, such as UltraBoss.

Like lice, mites infest goats mainly during colder months. They come in two types: burrowing and non-burrowing. The non-burrowing mites usually start in hairy areas of the body, such as the tail, and then work their way along the body. They attach to the skin and puncture it, releasing body fluid. You may see crusty patches and hair loss on a goat under attack from mites.

Some mites live in goats' ears. These ear mites more commonly cause problems in LaManchas because their small external ears are not as protective as the longer ears. Use mineral oil in the ears to smother mites there.

Burrowing mites are related to the mite that causes scabies in humans. They start in areas that are hairless or have little hair, such as the goat's face or ears. They cause itching and bare burrows in the skin and, eventually, may lead to thickened skin and extensive hair loss.

You can get rid of both burrowing and non-burrowing mites with subcutaneous (under the skin) injections of ivermectin. For best results, treat the whole herd and do a second treatment to ensure that all eggs that hatch after the initial treatment are dead.

Fleas and keds (also called louse flies) are wingless, jumping bugs that can infest goats, usually in the spring or summer. All of them are bloodsuckers, but they usually are more of a pest than a serious health problem. Goats can get fleas from dogs and cats, and they can get keds from sheep.

If your goats have fleas or keds, you probably notice them rubbing, scratching, and chewing, and you will be able to see the bugs upon inspection. You can treat the goat with one of the products that work on lice, such as Co-Ral dust or UltraBoss Pour-on.

If your goats are pastured in or near woods, they're a target for ticks. Ticks can be more than just pests because they can spread Lyme disease, Rocky Mountain spotted fever, and other diseases that affect goats and humans. Ticks burrow into the goats' skin, so make sure to remove them as soon as you see them. A tick that has attached to a goat looks like a skin tag and can be as big as a pencil eraser.

To remove a tick, grasp it with tweezers as close as possible to the head or mouth and pull gently until it lets go. Drop the tick into a jar of alcohol to kill and preserve it in case you want to have it examined later for disease. To prevent future ticks, you can treat the goat with a pour-on or spray that contains the natural insecticide permethrin.