How to Breed Your Goats 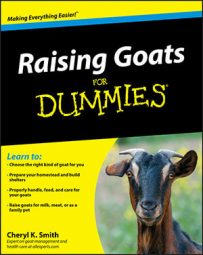 To breed goats, you have to recognize when a doe is in heat and when a buck is in rut. Some signs that your goats are ready for breeding are more obvious (to your nose as well as your eyes) than others. Here's what to watch for:

The heat cycle lasts from a few hours to a few days. You might not be able to tell that a kid is in heat, but an adult doe usually creates quite a hullabaloo.

During rut, bucks are ready to breed and can think of nothing else. A buck in rut urinates into his mouth and on his chest, face, and beard, turning them yellow and sometimes causing urine scald with consequent hair loss. The resulting smell, caused by the urine and increased activity in the scent glands near the horns, leads people to think that all goats stink. But that smell also attracts does and brings them into heat.

During rut, bucks blubber, snort, grunt, and flehm, or make a distinct face that includes curling the upper lip. They fight other bucks over the does, even if those does are unreachable. They mount each other in a wild display of dominance.

Bucks in rut can mate up to 20 times a day, although doing so puts them under a lot of stress. They often stop eating or eat less during rut, losing weight and body condition.

Supplement your bucks' diet with some grain, leafy branches, and even beet pulp during this taxing time. Keep an eye on your bucks to make sure that one of them isn't getting injured by the others or sick from lack of food and excessive activity.

When a doe exhibits signs of heat, you can put her with a buck. He will act very interested and begin pawing and stomping with a front foot. If she urinates, he will put his nose in the stream and flehm. The doe will wag her tail repeatedly and stand still when the buck tries to mount her, although they may circle and go on with this foreplay for five or ten minutes first.

The sex lasts just seconds. To ensure that the doe becomes pregnant, let them do it two or three times in a session. If she doesn't come back into heat, you can presume they were successful.

In rare cases, even when a doe appears to be in heat, she may dislike a specific buck and refuse to be bred. Sometimes you can put her in a stall with the buck and she comes around, but other times she will do everything she can to get away. Older does often don't like baby bucks, who either don't smell sexy enough yet or are not aggressive enough and don't woo properly.

If you let your buck live with the does during breeding season, you need to start making plans for housing him separately when the kids are born. Not only will he be a pest when a doe goes into labor, but you risk him re-breeding the doe too early.

Cheryl K. Smith has raised a small herd of dairy goats under the herd name Mystic Acres since 1998. She is an editor, freelance writer, and former attorney, as well as goat expert.