Homesteading: What You Need to Brew Beer

By: Todd Brock and
Updated: 09-02-2019
From The Book: Backyard Homesteading All-in-One For Dummies

Explore Book Buy On Amazon
As a backyard homesteader, you’re already eating the fruits of your labor that come out of your garden. Why not bring that same do-it-yourself mentality to something you enjoy out of a glass, too? Homebrewed beer can be every bit as good as — if not better than — a lot of commercial beer, with more flavor and character than most. In fact, avoiding mass-market beer was the original inspiration for homebrewing. Since homebrewing became legal almost 30 years ago, the interest in hand-crafted beer has blossomed.

But forget any preconceived notions you may have about shiny copper kettles and coils taking up your whole kitchen and huge wooden vats bubbling and churning in the cellar — those notions are the product of vivid imaginations and vintage Hollywood movies. Human civilization is well into the stainless-steel and plastic age, where everything is smaller, more durable, and lighter.

You can brew your own beer with minimal equipment — readily available in simple kit form — and a short time commitment. A batch of beer is about a three-week process (on the short end), but that includes only four to six hours of work; the rest is waiting as you let the beer do its thing.

Adding some homebrewing efforts to your homestead will be pretty painless — and with a tasty, frothy reward waiting for you at the end!

To the first-time brewer, the vast quantities of equipment and ingredient choices related to homebrewing can be somewhat intimidating. Homebrewing equipment varies, as shown, but any homebrew supply shop worth its salt can get you what you need to get started. If you don’t have a local homebrew supply retailer in your area, mail order is the next best option. Many mail-order shops have toll-free phone numbers or websites for ordering, and most offer free catalogs. 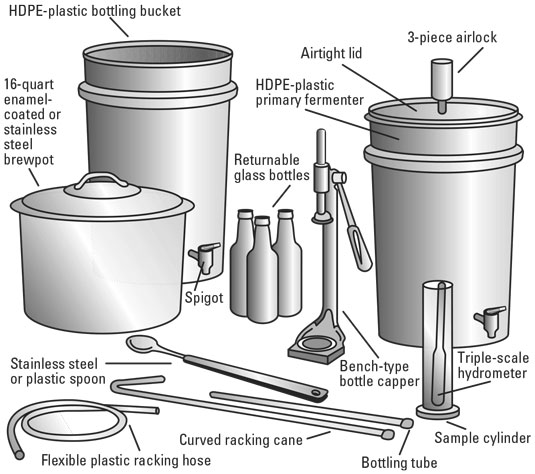 Many homebrew shops sell this basic equipment as a start-up kit.

At the beginner level, the minimum amount of equipment you need to brew beer correctly will cost about $70. This setup is relatively bare-bones, but it’s enough to get you up and running. As you become more familiar and comfortable with the processes and procedures, you'll want to acquire additional and better equipment.

To help you get the wheels turning, the following table provides a starter list of necessary items and their approximate costs.

How much does a homebrewed batch cost?

The average batch of homebrewed beer is 5 gallons, or 53.3 12-ounce bottles of beer. At the beginner level, the ingredients for a typical batch run about $30 to $35. The amount you pay fluctuates because of many factors, including where you shop for your ingredients (don’t forget shipping charges for mail order), whether you buy top- or bottom-of-the-line ingredients, and the style of beer you like to brew. Big-bodied, alcoholic beers require more fermentable ingredients than do light-bodied, watery beers. (Barley wines can cost as much as 100 percent more to make than pale ales, for example.)

Brewing uses grain (mostly malted barley), hops, yeast, and water. Thanks to many stores and Internet sites that specialize in brew supplies, homebrewers today have access to most of the same ingredients used by corporate brewhouses everywhere. Of course, these shops don’t just provide the everyday ingredients for the average beer; different hop varieties and yeast strains from around the world are now available in the homebrewing market.

Of the four main ingredients used to make beer (barley, hops, yeast, and water), barley — really, grain in general — makes the biggest contribution. It’s responsible for giving beer its color, underlying flavor, sweetness, body, head of foam, and mouthfeel (the textural qualities of beer on your palate and in your throat — viscosity, or thickness, carbonation, alcohol warmth, and so on). Grains also contribute the natural sugars that feed the yeast, which in turn converts the sugars into alcohol and carbon dioxide during fermentation.

Before you can brew with barley, it must undergo a process known as malting. The malting process, simply put, simulates the grain’s natural germination cycle. Only after the barley has undergone the malting process does it become malt, or barley malt.

If malts represent the sugar in beer, hops surely represent the spice. In fact, you use hops in beer in much the same way that you use spices in cooking. The divine mission of hops is to accent the flavor of beer and, most importantly, contrast the sweetness of the malt.

Hops contribute bitterness (to offset the sweet flavor of malt), a zesty flavoring (to accent the malt character), a pungent floral or herbal aroma, bacterial inhibitors, and natural clarifying agents.

The hop cones used in the brewing process grow on vines that may reach 25 feet on commercial hop farms. Hop plants are hardy perennial plants that are prolific under ideal conditions, and each may produce up to 2 pounds of dried hop cones per season.

Traditionally, brewers handpicked hops from the vine and air-dried them in bulk before tossing them whole into the brew kettle. Today, however, hops are processed and sold in four forms: small processed pellets, larger compressed plugs, whole-leaf hops, and concentrated liquid hop extract.

Some of the different ways that brewers process hops.

Although yeast is an ingredient that the average beer consumer rarely contemplates, brewers often consider it the most important ingredient. Yeast can have a greater influence and effect on the finished beer than any other single ingredient.

Yeast is a member of the fungus family. It’s a living single-celled organism and one of the simplest forms of life. Because it has cell-splitting capabilities, it’s also self-reproducing. Yeast is the one ingredient responsible for carrying out the fermentation process in brewing: simply put, the natural conversion of sugar to alcohol.

Brewers categorize and classify beer styles by the type of yeast used to ferment them. Therefore, they choose a yeast according to the style of beer they want to make: ale or lager.

Ale yeast is a top-fermenting strain, meaning it floats on the top of the beer. Virtually all ale yeast works best in fairly warm temperatures (60 to 70 degrees Fahrenheit). Lager yeast is a bottom-fermenting strain (meaning it sinks to the bottom of the fermentation vessel at the end of fermentation) and works best between 38 to 50 degrees Fahrenheit.

Yeast for the homebrewer comes in both a dry form and a liquid form. Because of its convenience, dry yeast — granulated and contained in a small packet — is recommended for beginners. The packets that come with malt extract kits are sufficient to ferment a 5-gallon batch of homebrew. Dry yeast is freeze-dried, so it should last a long time (but refrigerate all yeast to maintain optimum freshness).

For the best results with dry yeast, always rehydrate the dormant cells by pouring them into a cup of warm water. This gentle wake-up call prepares the yeast for the upcoming fermentation. Be sure to sanitize the vessel in which you rehydrate the yeast.

Considering that it constitutes up to 95 percent of a beer’s total ingredient profile, water can have a tremendous influence on the finished product. The various minerals and salts found in water used for brewing can accentuate beer flavors or contribute undesirable flavor components. In many cases, water chemistry is key in the flavor profile of a classic beer style.

That said, you can still make good beer with average tap water. Thousands of homebrewers are proving it every day. A general rule says, “If your water tastes good, so will your beer.”

At any skill level, make sure that you keep the following things in mind:

If you choose to buy your water, you may be tempted to buy distilled water because it’s the purest form available. But distilled water is also devoid of some of the important natural elements beneficial to beer.

Todd Brock is a television writer and producer whose work includes PBS's Growing a Greener World, DIY Network's Fresh From the Garden, and HGTV's Ground Breakers. He is the coauthor of Building Chicken Coops For Dummies.