By: Todd Brock and
Updated: 09-02-2019
From The Book: Backyard Homesteading All-in-One For Dummies 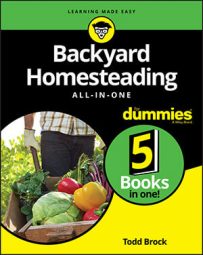 Explore Book Buy On Amazon
Bottling homebrew isn’t a difficult procedure, but many brewers often deride it as one that’s tedious at worst and boring at best. But for millions of people who brew their beer at home, bottling represents the only option for packaging their finished brew, making it a mandatory step in the homebrewing process.

The American brewing industry continues to package beer — albeit in limited markets — in a variety of 7-, 12-, 16-, and 22-ounce and quart-size returnable bottles; check with your local beer retailer. You can easily purchase brand-new 12- and 22-ounce bottles through homebrew supply shops, but the cost is sometimes prohibitive, mostly due to the cost of shipping.

Using larger bottles is a way to expedite the bottling process as well as free you from its drudgery. The more beer the bottles can hold, the fewer bottles you need. For instance, to bottle an entire 5-gallon batch of beer in 7-ounce nip bottles, you need to clean, fill, and cap more than 90 of them. If you use 22-ounce bottles, on the other hand, you need only 30 of them.

Now, here are the steps for the bottling brigade:

1. Fill your utility tub or other designated sanitizing basin with enough cold water to cover your submerged bottles, adding bleach or another sanitizing agent according to the manufacturer's directions.

2. Submerge as many bottles as you need to contain your full batch of 5 gallons of beer.

Make sure your bottles are scum-free before dunking them in the sanitizing solution. Any bottle with dried or living crud in the bottom needs to be scrubbed separately with a cleanser such as trisodium phosphate (TSP) before you sanitize it.

You can fill and submerge the bottles in less than half the time if you place a drinking straw in the bottles; the straw enables the air in the bottle to escape through the straw instead of slowly bubbling through the opening (your bottling tube with the valve detached suffices here).

3. Allow your bottles to soak for at least half an hour (or the time necessary according to the package's directions).

4. While the bottles soak, dissolve 3/4 cup of dextrose in a pint or so of water in one of the saucepans, cover the solution, and place it on a burner over low heat.

5. Put your bottle caps into your other saucepan, fill the pan with enough water to cover all the caps, and place the pan on another burner over low heat.

Put enough bottle caps for as many bottles as you have soaking plus a few extra; having too many sterilized caps ready for bottling is better than not having enough.

6. Allow both pans to come to a boil, remove them from the heat, and allow them to cool.

7. After the bottles soak for half an hour, connect the bottle rinser to the faucet over the sanitizing tub.

8. With one hand over the opening (so that you don’t get squirted), turn on the hot water.

After the initial spray, the bottle washer holds back the water pressure until a bottle is lowered over the stem and pushed down.

Continue this step until all bottles are clean.

Visually check each bottle for cleanliness rather than just assume that they’re all clean.

Four dozen free-standing bottles make one heck of a breakable domino effect. Always put your cleaned bottles back into six-pack holders or cardboard cases to avoid an aggravating and easily avoidable accident.

10. Drain the utility tub of the bottle-cleaning water.

11. Place the bottling bucket in the tub and fill it with water and the sanitizing agent of your choice.

12. Place the bottling hose, bottling tube, and hydrometer cylinder into the bottling bucket and allow them to soak for half an hour (or according to sanitizing agent directions).

13. While the bottling equipment soaks, retrieve the still-covered fermenter from its resting place and place it on a sturdy table, counter, or work surface about 3 or 4 feet off the ground.

At this point, you need to set up your bottling station, making sure that you have the priming sugar mixture (still in the saucepan), bottle caps, bottle capper, bottles, and hydrometer with cylinder on hand.

If you’re bottling your brew directly from the primary fermenter, you want to have already taken a hydrometer reading to confirm completion of fermentation. If you’re bottling from your secondary fermenter (glass carboy), incomplete fermentation isn’t a concern, and you can take a hydrometer reading (to determine final gravity and alcohol content) as the beer drains into the bottling bucket.

14. After half an hour, drain the sanitizing solution from the bottling bucket through the spigot on the bottom. After the bucket is empty, thoroughly rinse the remaining pieces of equipment (hose, bottling tube), along with the bottles and caps, and bring them to your bottling station.

If you’re initiating the bottling procedures from your glass carboy, you can’t rely on the convenience of a spigot to drain out the beer. You need to use your racking cane and siphon the brew.

16. Pour the dextrose and water mixture into the bottling bucket.

The dissolved corn sugar mixes with the beer as the beer drains from the fermenter into the bottling bucket. After you’ve bottled the beer, this sugar becomes another source of food for the few yeast cells still remaining in the liquid. As the yeast consumes the sugar, it produces the beer’s carbonation within the bottle. Eventually, the yeast again falls dormant and creates a thin layer of sediment on the bottom of each bottle.

If, by chance, you bottle a batch of beer that isn’t fully fermented or you somehow add too much dextrose at bottling time, you may find out first-hand what a mess exploding bottles can make. Excess sugar (whether added corn sugar or leftover maltose from an unfinished fermentation) overfeeds the yeast in an enclosed bottle. With nowhere for the pressure to go, the glass gives before the bottle cap. Kaboom! Mess! Do not over-prime. (Use no more than 3/4 cup of dextrose in 5 gallons of beer.)

17. Open the spigot on the fermenter and allow all the beer to run into the bottling bucket.

Don’t try to salvage every last drop from the fermenter by tilting it as the beer drains down the spigot. The spigot is purposely positioned about an inch above the bottom of the fermenter so that all the spent yeast and miscellaneous fallout remains behind.

18. After the last of the beer drains, close the spigot, remove the hose, and rinse it.

Avoid splashing or aerating your beer as you bottle it. Any oxidation that the beer picks up now can be tasted later. Yuck.

20. Arrange all your bottles on the floor directly below the bottling bucket (keeping them all in cardboard carriers or cases to avoid breakage and spillage).

21. Open the spigot on the bottling bucket and begin to fill all the bottles.

Gently push the bottling tube down on the bottom of each bottle to start the flow of beer. The bottle may take a short while to fill, but the process always seems to accelerate as the beer nears the top. Usually, a bit of foam rushes to the top of the bottle; don’t worry! As soon as you withdraw the bottling tube, the liquid level in the bottle falls.

22. Remove the tube from each bottle after foam or liquid reaches the top of the bottle.

This figure shows you how full you want your bottles to be. 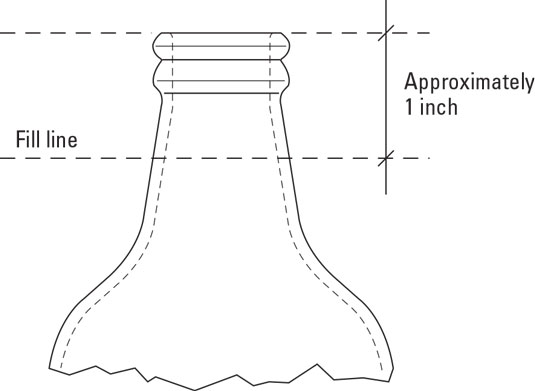 After you remove the bottling tube from the bottle, the level of the beer falls to about an inch or so below the opening. Homebrewers have differing opinions as to how much airspace (or ullage) is necessary. Some say the smaller the airspace, the less oxidation that can occur. Others claim that if you don’t have correct ullage, the beer can’t carbonate properly. Basically, if it looks like the space in bottles of beer from commercial breweries, go with it!

24. Place all the bottles on your tabletop or work surface. Place a cap on each bottle, position your bottles in the capper (one at a time), and pull down on the capper handle or levers slowly and evenly.

You may want to do this task as soon as each bottle is full as insurance against everything that can go wrong when full bottles of your precious brew are sitting around open. A bench capper, as seen in this figure, is free-standing and can be attached to a work surface (permanently, if you like), which leaves one hand free to hold the bottle steady. 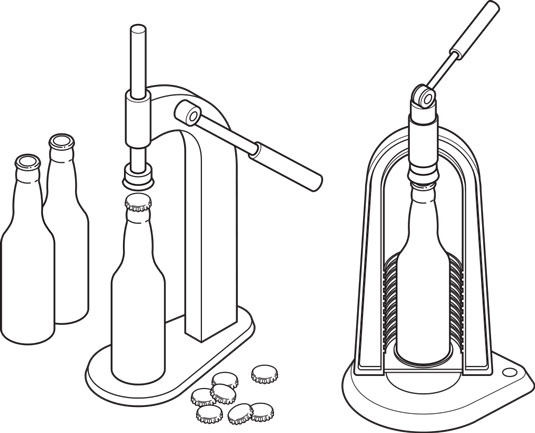 You can attach a bench-type bottle capper to a work surface for easy use.

Both bench- or two-handle-style cappers come with small magnets in the capper head designed to hold and align the cap as you start crimping. Many homebrewers don’t trust the magnet to hold the caps in alignment and prefer to seat them on the bottles by hand.

Occasionally, a cap may crimp incorrectly. If you suspect that a cap didn’t seal right, tilt the bottle sideways and check for leakage. If you find you have a leaker, yank the cap and replace it. (You boiled extras — right?)

25. Your homebrew needs to undergo a two-week conditioning phase, so store your liquid lucre in a cool, dark location (such as the same place that you kept the fermenter).

This phase is where the remaining yeast cells chow down on the dextrose and carbonate your beer.

Putting your brew in the fridge isn’t a good idea — at least for the first two weeks — because the cold temperatures stunt the yeast’s carbonating activity. Aim for fifty degrees Fahrenheit.

26. Thoroughly rinse your brewing equipment in hot water and store it in a place that’s relatively dust- and mildew-free. You may even want to go that extra step and seal all your equipment inside a large-capacity garbage bag.

After two weeks pass, check to see whether the bottles have clarified (the yeasty cloudiness has settled out). Chill a bottle or two for taste-testing. Like any commercial beer, you need to decant homebrew before drinking, not only to release the carbonation and the beer’s aromatics but also to pour a clear beer. Drinking homebrew out of the bottle stirs up the sediment, creating a hazy beer.

Todd Brock is a television writer and producer whose work includes PBS's Growing a Greener World, DIY Network's Fresh From the Garden, and HGTV's Ground Breakers. He is the coauthor of Building Chicken Coops For Dummies.