The Evolution of Gardening and Keeping Chickens

By: Bonnie Jo Manion and Robert T. Ludlow and
Updated: 03-26-2016
From The Book: Gardening with Free-Range Chickens For Dummies

Gardening with Free-Range Chickens For Dummies 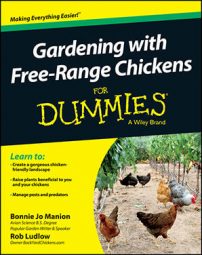 Gardening has evolved quite a bit over the years. The addition of backyard and free-range chickens has come into the mainstream along with modern gardening.

From Victory Gardens to the desire for modern, seasonal fresh food

In that same time frame, also out of the Bay Area, Rosalind Creasy pioneered mixing flowers and vegetables and called her philosophy edible landscaping. She taught people to exchange water-thirsty front lawns for beautiful landscapes of fruits and vegetables.

In the past decade, food writers have graphically written on the dangers of how much your food has been industrialized and its impact on the environment, as well as the impact on nutrition in the typical Western diet.

In 1986, the "slow food movement" began in Italy, as an alternative to fast food and a goal of championing local agriculture and a return to artisanal food. Now, globally it has 100,000 members in more than 100 countries.

Its goals are sustainable foods and the promotion of people and businesses involved in local food — such as chefs, restaurateurs, and local farmers producing quality artisan foods that are highly praised for their unsurpassed flavor and breadth of satisfaction. It strives to preserve traditional and regional cuisines, and promotes local farming and agriculture that's part of the local ecosystem.

Today community gardens are just as popular as the necessary "Victory Gardens" were during the years through World War I and II, in the United States and in many other countries. During war times, the U.S. government asked private citizens to grow their own food at private homes and public parks for the purpose of easing the food shortages and rationing brought on by the war effort. 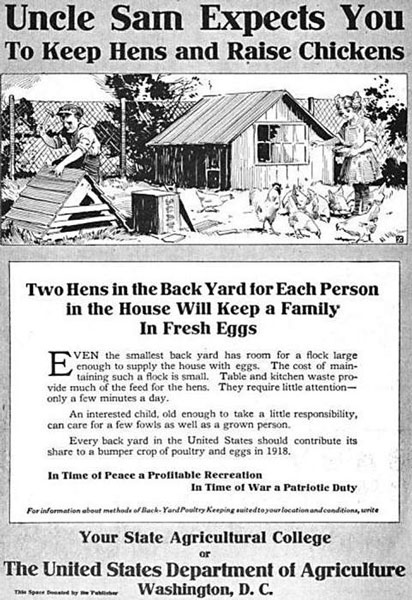 Now, it isn't uncommon to see abandoned vacant city lots transformed into urban "Gardens of Eden" by willing community residents. There's something empowering about working together for a common goal, and sharing the abundant fruits of your labor, as these community gardens demonstrate. For more information about community gardens in your area, contact the American Community Gardening Association.

Taking a cue from Alice Waters, schoolyard vegetable gardens are prevalent in school systems today. Children learn how to grow their own food in these school gardens which have become living classrooms. Their enthusiasm for gardening, often spills over exuberantly to do more in their own backyard.

Today, families like the satisfaction of growing their own food, having control of how their food is raised, and the unsurpassable quality seasonal fresh food tastes from their garden.

Work toward growing your own food

As a nation, the U.S. has been influenced and educated over time by this local fresh food movement. Today many people want to have their own vegetable gardens, and grow their own food in their own backyards. In doing so, you have the capability to really make a difference for the environment and ultimately the planet.

If you grow your own food, you save energy on freight and transportation costs, save wildlife habitats by not having to clear the land and use it for agriculture, send less plastic packaging materials into landfills, have control of chemicals and pesticides used in your food, have freedom to grow "nearly lost" heirloom edibles and raise endangered poultry breeds for future generations, and lastly enjoy fresh seasonal food that abounds with incredible wholesome flavor and health for your bodies.

Growing your own food has become very popular for all these reasons. Raising chickens in your own garden and property is the next easy step if you want more.

Check out the trend of owning chickens

Free-ranging chickens isn't a new concept. At the turn of the 20th century, most poultry was raised on small family farms. Farm flocks were small, letting the hens fend for themselves through foraging, and supplemented with a little grain and kitchen scraps. Eggs were the primary value, and meat was considered a secondary product. Roast chicken was the special Sunday dinner.

The concept of pasturing poultry, letting chickens free-range during the day, and prudently confining them in secure housing at night was prevalent. A faithful watchdog was another important element to guard the flock during the day.

This popular method of pasturing poultry, reached a peak in the U.S. from the 1930s through the 1960s. Farmers saw that free-ranging poultry not only improved their soil, but also ultimately produced tastier eggs, as well as firm and better textured meats. In addition, it was humane treatment. Farmers often integrated pasturing poultry after other grazing livestock, such as cows, for managed grazing benefits.

In the 1950s, the trend began transitioning away from the family farms to industrialized, larger-scale, specialized operations that confined and housed chickens full time for greater production benefits. At this same time, the concept of raising chickens, called "broilers," for meat production began. Broilers had the ability to grow to maturity very quickly, and be ready for the consumer market in an amazing 6–8 weeks time.

Today, having backyard chickens is incredibly popular, and in a way it's reminiscent of nostalgic past times on the farm. You may be lucky enough to live on a farm, but statistics currently indicate the majority of the U.S. population lives closer to cities and urban areas. Perhaps gardens and an interest in raising chickens are what helps keep people grounded to the land.

Chickens are a natural as garden companions because they help with garden chores such as weeding, eating insects, keeping a lawn mown, and depositing fertilizer. If that is not enough, they have fun little engaging personalities, are very sociable, and provide protein-rich eggs.

Bonnie Jo Manion has been featured in national garden magazines with her gardens, organic practices, chickens, and designs. Follow Bonnie at VintageGardenGal.com. Rob Ludlow is the owner of BackYardChickens.com, a top source on chicken raising, and the coauthor of Raising Chickens For Dummies.