How to Brew Mead from Your Beehive’s Honey

Mead is a wine made from honey instead of grapes. It was the liquor of the Greek gods and is thought by scholars to be the oldest form of alcoholic beverage. In early England and until about 1600, mead was regarded as the national drink. In fact, the wine that Robin Hood took from Prince John had honey as its base.

When mead is made right, the resulting product is simply delicious! And like a fine, red wine, it gets better and better with age. Many companies supply basic wine- and mead-making equipment to hobbyists. All you need is a little space to set up shop, and some honey to ferment. The key to success is keeping everything sanitary. 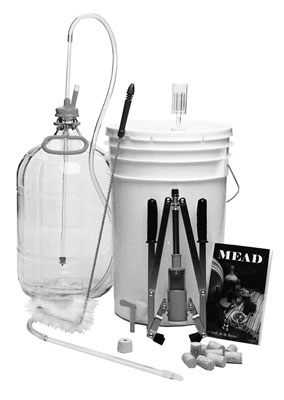 The following recipe produces an extraordinary mead. Technically, this is a Metheglin, the term given to mead that is spiced. The recipe yields about 40 bottles of finished product. Adjust the amounts to suit your needs.

Ideally, keep the room’s temperature at between 65 and 68 degrees F (the cool basement is a good place to brew mead). If the temperature is higher than 75 degrees F, the yeast may die; if it’s less than 50 degrees F, fermentation ceases. Note that a portable space heater with a thermostat helps control basement temperatures during winter.

You can get your wine sparkling clear by using a special filtering device available from beer- and wine-making suppliers.