By: Amy Riolo and
Updated: 04-13-2022
From The Book: Mediterranean Lifestyle For Dummies 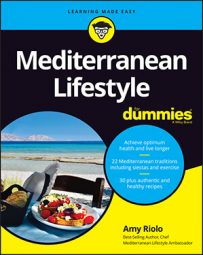 Explore Book Buy On Amazon
You may have heard of the Mediterranean diet and wondered if it was right for you. But the reason people in the Mediterranean region enjoy good health goes beyond the diet — it’s about their entire lifestyle. Knowing why the lifestyle is good for you is the first step to making it work. A key part of the lifestyle is the way people approach food. They enjoy their food; they don’t view it with rules and restrictions in mind. Armed with this information, you’re ready to review the key components of the Mediterranean lifestyle so you can put them to work in your daily life.

Why the Mediterranean lifestyle is good for you

Evidence shows that the anti-inflammatory and antioxidant benefits of following a Mediterranean diet can be effective in preventing and reversing many medical conditions when followed properly. The good news is that the diet is just one of the many lifestyle factors that can significantly improve your health. By increasing physical activity, getting better sleep, socializing, and engaging in meaningful regular activities, in addition to getting the proper nutrition, diseases can be not only treated but prevented in the first place.

Understanding the Mediterranean approach to food

Long before you begin cooking, pick a restaurant, or start to eat, if you want to truly live with both pleasure and health in mind, you should adopt the Mediterranean approach to food. Different cultures think about food differently. In the United States, for example, people trying to lose weight often say, “I can’t even look at food” or “I’m on a diet — I can’t even think about food.” Many foods are labeled “bad,” and thinking of it too much makes you a glutton.

In the Mediterranean region, people view and treat food as their greatest ally in maintain optimal health. They’re grateful for their food and feel blessed to have it. They enjoy food to its fullest with an “everything in moderation” approach. Food is also used as culinary medicine. As soon as someone has a medical symptom, they’re automatically “prescribed” a dried herb, type of food, or a spice by a friend or family member in order to make them feel better. In the traditional culture, whole food groups were never completely cut out the way they are in the United States today. Instead, people abstained from certain foods during fasting periods and when they weren’t in season, but then they enjoyed them again later on.

People in the region are willing to pay more money for top-quality local food, especially if it comes from producers they know. Because the body craves the nutrients of fresh, local, seasonal produce, taking the time to procure the best of it will set you up for success. In addition, the act of growing foods yourself and cooking at home are two other healthful techniques that are praised in the Mediterranean region. Hospitality is paramount in each of the region’s countries as well, which means that people enjoy offering generous amounts of the best foods that they can afford to their guests. Food is, after all, meant for sharing, and eating communally is the foundation of Mediterranean eating.

Facts to know before starting the Mediterranean diet

In order to fully benefit from the Mediterranean diet, consider all the lifestyle-based concepts that are prevalent there. By taking a positive attitude toward food, you’ll be able to understand the important role that it plays in the Mediterranean lifestyle. Throughout the region, food is viewed not only as a traditional medicinal, but also as a form of artistic expression, a social activity, a cultural relic, and most of all, an important symbol of hospitality. Making the mental shift to valuing the preparation and enjoyment of natural, whole foods, getting regular physical activity, and making a commitment to enjoy foods in community whenever possible is important. The Mediterranean diet offers great-tasting food with rich traditions attached to them. It pleases all ages and palates.

Whether you want to reverse an illness that you’re already dealing with, or prevent yourself and your loved ones from getting sick, incorporating as many aspects of the Mediterranean lifestyle into your daily life as possible will guarantee results. A Mediterranean diet combined with physical activity, good amounts of sleep, and daily functionality will help you to achieve your mental and physical health goals. Incorporate the following concepts into your Mediterranean diet plan for maximum pleasure and health:

Amy Riolo is an award-winning author, chef, television personality, food historian, and culinary anthropologist. She is known for simplifying recipes for the home cook. She leads culinary tours in Italy, is the co-founder of A.N.I.T.A. (National Italian Academy of Food Traditions), and has her own line of private-label Italian products.