The Role of Body Mass in Type 2 Diabetes

Too, just as the average BMI has steadily risen over the past 20 years or so, where more than two-thirds of the U.S. adult population now falls into or beyond the overweight BMI range, the incidence of type 2 diabetes has risen at almost exactly the same rate.

In fact, plotting the lines on a graph shows a nearly identical incline, beginning in 1980 as the type 2 obesity epidemic began. 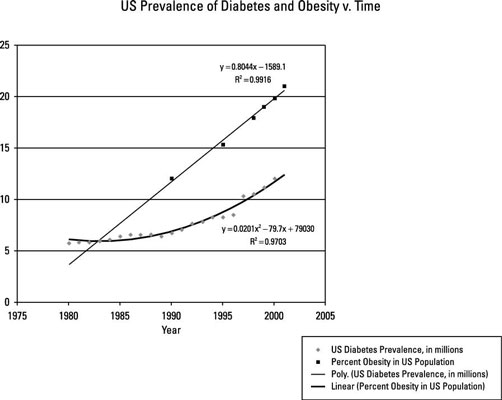 Even more telling, and more concerning, is that rising obesity among children and adolescents has caused type 2 diabetes, once nearly unheard of in this age group, to become relatively common. In the years 2000 to 2005, type 2 diabetes represented almost one-third of new diabetes cases among youth 10 to 19 years old, with a rate of almost nine cases of type 2 per 100,000 youth.

Also, modest weight loss of from 5 to 7 percent of body weight in people with prediabetes can return blood glucose levels to normal. That would be a weight loss of only 10 to 14 pounds for a 200 pound person.

Scientists are zeroing in on the culprit where excess weight and diabetes are linked, and one hint has been body shape. It seems that weight carried in the midsection of the body, as opposed to legs and posterior for example, increases the risk of type 2 diabetes substantially.

Sometimes referred to as an apple shape (where the posterior focused weight is called a pear shape), weight around the midsection represents internal fat deposits, too. This “visceral” fat sends chemical signals that promote insulin resistance, and is much more associated with type 2 diabetes than subcutaneous — under the skin — fat.

Visceral fat explains why people of Asian origin acquire type 2 diabetes at a normal BMI, because body scans have shown they accumulate visceral fat at lower body weight than other ethnic groups. The role of visceral fat also explains why losing a modest amount of weight can have such a striking impact on insulin resistance.

Visceral fat, fortunately, is the first to go in a diet and exercise weight loss effort, and the exercise part is especially effective at eliminating these dangerous internal fat deposits.