By: Marshalee George and Kimlin Tam Ashing and
Updated: 11-02-2017
From The Book: Detecting & Living with Breast Cancer For Dummies

Explore Book Buy On Amazon
A mammogram is a procedure done with a machine that takes an X-ray of the breast. Mammograms can help to find breast cancer early, sometimes up to three years before a mass can be felt. Well-developed breast cancers are almost always seen on a mammogram, but cancers that are not as developed can be missed on a mammogram. 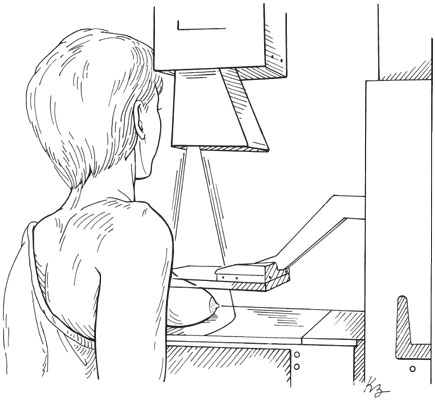 In a mammogram, the breast is flattened to enhance the X-ray image.

Sometimes your mammogram may show small areas of calcium in patterns within the breast called calcifications, and these are often present in the breast with no lump. Calcifications can sometimes mark areas of the breast that might develop into cancer or they can be present in noncancerous changes in the breasts. The skill and expertise of a good radiologist is necessary to read the different calcium patterns and determine which change is most likely related to cancer.

Currently the tomo mammogram (sometimes called a 3D mammogram, depending on manufacturer) is the best type of mammogram for screening. A conventional mammogram takes images of the breast in four views, whereas a tomo mammogram takes images and divides them into an average of 40 slices or more, depending on the size of the breast. Tomo mammograms help the radiologist find breast cancers earlier — even many years earlier than the conventional mammogram would have found it. Tomo mammograms also help reduce the number of patients that are called back for additional imaging involving overlapping tissues or dense breasts.

Research has shown that tomo mammograms detect 30 percent more breast cancers and reduce the callbacks for additional imaging by 40 percent. Radiologists feel that the tomo mammogram is so useful that almost every patient should want to have it.

Some cancers don't show clear signs on a mammogram. So always tell your doctor if you find any lump or changes in your breast, even if you recently had a mammogram. Mammograms have saved countless lives, but they're not perfect. There is no screening test that will detect cancers 100 percent of the time. Unfortunately, there will always be some breast cancers that will be missed or not seen on a mammogram. However, tomo mammograms detect more cancers at an earlier phase of development.

Most experts will argue that the benefit of the screening mammogram in identifying breast cancer early far outweighs the risk of not having it done: Research has shown that women 50–69 derive the most benefit from screening mammograms. However, one inherent flaw with any research finding is that they can only report on a targeted group of women who voluntarily participate in a screening study. For example, the research may have been done only on one or two specific ethnic groups of women (such as Asian or Caucasian) aged 50 and older. Can those results be applied to African American or Latin American females, or to women under age 40? These are the questions you must wrestle with as you make the decision to start having screening mammograms.

Conventional mammograms are still useful, but a breast ultrasound may be needed in patients with dense breast or high risk. And as helpful as mammograms have been, there are a few downsides.

It's difficult to tell which type of DCIS will become invasive breast cancer. The lower the grade of DCIS, the less likely it is to become invasive, whereas the higher the grade of DCIS, the more likely it is to become invasive. Because the prediction of DCIS severity is difficult, the overall recommendation is to remove the DCIS tumor in healthy patients. Typical treatment for DCIS is with lumpectomy (breast-conserving surgery) in addition to radiation therapy, mastectomy, or endocrine/hormonal therapy.

A mammogram may show false positive results — changes that are suspicious for breast cancer are seen on X-ray, but a biopsy turns up negative for cancer. Sometimes a mammogram shows a mass or change that requires you to keep following up at six-month intervals with no change. In addition to having more than one mammogram per year, you may be called for a diagnostic mammogram, breast ultrasound, breast MRI, or even a biopsy — with a final report showing negative for breast cancer. Even though a breast biopsy is generally a low-risk, safe procedure, there may be complications, such as bleeding or infection. Many changes in the breast such as a mass or calcifications are not breast cancer but can indicate other breast conditions, such as fibroadenoma, cyst, papilloma, and so on.

How a mammogram is done

The technologist at the image center will ask you to stand in front of a mammogram machine with two clear plastic plates. Your breast will be placed on one plate and the other plastic plate will firmly press your breast from above. The plastic plates will flatten the breast, and you must hold still while the X-ray is being taken. You will feel some pressure on the breast. The technologist will repeat the process to take a side view of the breast and the other breast so they can be X-rayed in the same way. You may have a brief wait while the technologist checks to ensure that the X-rays show a good image of the breast and do not need to be redone.

The technologist can't tell you the results. Your X-rays will be read by a radiologist — a medical doctor specialized in diagnosing and treating diseases and injuries using medical imaging techniques, such as X-rays, ultrasound, magnetic resonance imaging (MRI), and more. A radiologist is the only person to provide you with the results of your mammogram.

Your mammogram X-ray will look different from someone else's because every breast is different. Some breasts are dense, fatty, or fibroglandular.