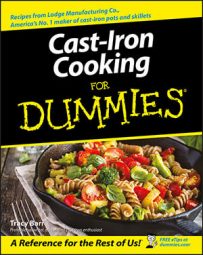 This recipe for Jam Cake with Old-Time Icing was handed down from generation to generation (as so many cast-iron recipes are). The ingredient list calls for blackberry jam, but you can use whatever flavor you have on hand. The icing (recipe below) uses whole milk and butter, which creates a subtly rich finish for the cake.

Garnish with fresh berries and sprigs of fresh mint.

Tracy Barr is the coauthor of Adoption For Dummies and Latin For Dummies. Lodge Manufacturing is America's oldest family-owned cookware manufacturer and the sole domestic cast-iron cookware foundry.