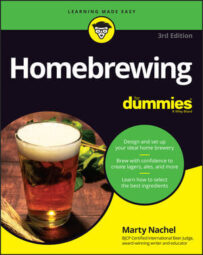 Explore Book Buy On Amazon
When you’re brewing your own beer at home, get to know the abbreviated versions of homebrewing terms to help read your recipes and directions, keep a basic measurement conversion chart handy, and check out the hierarchy of beers chart so you know what category and type of beer you want to homebrew and possibly enter into competition.

The following list has been compiled by the Beer Judge Certification Program and is used by the American Homebrewers Association for competitive purposes.

This hierarchical list presents an overview of all the world’s beer styles (along with styles for cider and mead). Listed are all of the major beer styles and their substyles.

Quite a few technical (and wordy) homebrewing terms exist, so to make it easier to read homebrewing recipes and directions, terms have been abbreviated. Here’s a handy guide for homebrewing abbreviations:

In case you need the metric equivalents of basic measurements, keep this simple conversions guide close by when you’re brewing your own beer at home:

Ingredients: The Building Blocks of Beer

Here it is, folks: a veritable smorgasbord of ingredient info. This includes various kinds of malts and base, adjunct, and specialty grains, and an overview of the companies that produce them.

Also listed are many different kinds of hops and what you need to know about them before you chuck them into your brewpot.

Finally, you’ll find yeast strains produced by a few of the industry’s heavy hitters, complete with descriptions and attenuation information. Dig in!

Following that list is a type-specific list of grain. In this second list, I’ve included the various grain types, divided by their usage (base grain, specialty grain, adjunct grain) and other details such as their Lovibond ratings and whether they require mashing.

Finally, you find a semi-comprehensive list of malt extract brands that produce a wide variety of beer kits for the extract homebrewer.

You’ll notice here and elsewhere when shopping for brewing grains that many of the grain names are branded, meaning the malting companies market them by specific names. Also of note: Whenever you see a grain with the prefix cara-, it simply denotes a caramel malt (also known as crystal malt).

The following list includes many of the top producers of grain for the brewing industry worldwide. These company names are widely known in the commercial brewing arena and are becoming more familiar and sought-after at the homebrewing level.

Briess: This Wisconsin-based maltster is one of the primary suppliers of brewer’s grain to the microbrewing industry, particularly in the Midwestern U.S. In addition to the wide range of malted grains that the company produces, Briess also markets a full line of liquid and dry malt extracts called CBW, or Concentrated Brewer’s Wort.

Dingemans: The Dingemans family has produced an extensive range of basic ingredients for the demanding Belgian and European brewer since 1875. The result is an outstanding line of brewer’s and specialty malts used not only in Pilsen type beers but also in Trappist, Abbey, and White beers.

Durst: An authentic German malt producer located in the fatherland of beer, Durst began as a family-owned country brewery and malthouse 170 years ago. It sold its first malt exports in 1924 and has since expanded into an international supplier producing 157,000 U.S. tons of malt each year.

Gambrinus Malting: This small Canadian maltster produces some of the finest 2-row malt in the world. Gambrinus Malting also produces malts not made by other well-known maltsters, such as the almost-forgotten bruhmalt, a pale malt that imbues the beer with a honeyed aroma and flavor.

Hugh Baird: Located in the U.K., the Hugh Baird Malting Company is one of the world’s best suppliers of specialty malts and authentic 2-row British Pale Ale malt.

Paul’s Malt: Paul’s Malt originated in the first half of the 19th century on the east coast of England, where its headquarters still reside today. Today, Paul’s Malt is a modern company and the U.K.’s largest maltster, producing in excess of 500,000 British tons of malt per year.

Rahr Malting: Rahr Malting Co. is a family owned company that has been in business since 1847. It produces and distributes malt and industry-related brewing supplies. Rahr’s malt production plants are located in Shakopee, Minnesota, and Alix, Alberta.

Schreier: This small maltster from Wisconsin is one of the small malting houses distributed by the American conglomerate Cargill.

Simpson’s: Established in 1866 by corn merchant James Parker Simpson, Simpson’s is still the largest totally independently family-owned malting company in the U.K. The company manufactures a wide range of quality malts, including specialty roasted malts, for the brewing, distilling, and food industries.

Weyermann: The 132-year-old malthouse housing Mich. Weyermann & Co. KG Malzfabrik is a protected historic site. But behind the red-brick turn-of-the-century building in Bamberg, Germany, lies the modernized heart of the world’s leading manufacturer of specialty brewing malts. For over a century, Mich. Weyermann has been providing specialty malts to breweries large and small on virtually every continent of the world.

This section provides you with details about a variety of base, specialty, and adjunct grains available to the homebrewer. Within these tables I’ve also listed Lovibond ratings and the need for mashing procedures -or not. These are by no means exhaustive listings — many more grains are available in the market. These are just meant to give you a “taste” of what’s out there.

Base grains denote all the malted grains (barley, wheat, rye, etc.) used to make beer. Brewers must mash all base grains order to create the wort that becomes beer through the magic of fermentation. Beginner and intermediate homebrewers can simply use malt extract to create their wort.

Specialty grains denote all the malted and unmalted grains (barley, wheat, rye, oats, etc.) you can add to the wort to give the finished beer a wide variety of colors and flavors that base grains don’t provide. Both all-grain brewers (those who mash their grains to create their wort) and extract brewers (those who create their wort from malt extract) can use specialty grains effectively.

Following is an alphabetical list of malt-extract brand names and their countries of origin. This list is simply to help beginners become familiar with brand names so that they can make informed choices on appropriate malts for their desired beer styles. In other words, if I intended to brew a Pale Ale, I wouldn’t choose an extract brand produced in Germany. Conversely, if I wanted to brew a lager, I wouldn’t choose a kit made in the U.K.

A few American-made brands have come to dominate the American market, so some of these foreign brands are no longer available in the U.S. (but they can still be found in Europe and Australia).

The world of hops is a fairly big one — one that continues to grow every year. Because of this scope, the discussion of hop varieties can be a fairly confusing subject. This section, which you should use in conjunction with Chapter 5, is designed to help you make decisions about which hops you should use in your brews.

You typically base your primary hop-choosing decision on the alpha-acid content of the hop variety — this characteristic tells you the bittering potential of the hop variety, or how much bitterness a particular variety may add to your beer. You make a secondary decision in regards to the hops’ aromatic potential (which isn’t measured by a numerical score) and its related flavor.

Hop varieties from around the world

The table below is an alphabetical list of most of the hop varieties currently in use in the brewing industry. They are listed by their variety name, their country of origin, their alpha acid content (expressed as a percentage) and how they are best used in the brewing process — as a bittering hop, as an aroma hop, or as dual-purpose (they can be used for either bittering or aromatizing).

This section lists most of the liquid-yeast strains available from three major liquid-yeast suppliers to the homebrewing industry; I’ve identified their products not only by the brand name but also by a beer-style-specific identifying code number. I’ve also included many other well-known freeze-dried-yeast suppliers. Note that these are not exhaustive lists; consult the websites of these suppliers for additional information.

You also find a beer style table designed to help you choose an appropriate liquid-yeast strain to produce any beer style you have in mind. In this table, I identify the recommended yeast strains by their code numbers.

Note that I also include a few mead and cider yeasts in some of these lists for your convenience.

This section shows yeast selections from three major liquid yeast suppliers, but these are by no means all of your options. There are other smaller yeast suppliers out there for you to consider, including Fermentum, Imperial Organic Yeast, RVA Yeast Labs, Giga Yeast, and several others . . .

This table gives you the most popular dry yeast brands arranged according to ale, lager, and Belgian beer styles:

You can use these dry yeasts for fermenting both Cider and Mead:

The list describes yeast cultures Wyeast considers advanced because the production of these beer styles is generally more difficult or involved than those styles listed previously.

The following tables give you popular beer styles and the Wyeast, White Labs, and Omega Yeast code numbers for the yeasts appropriate to each style.

All the following yeast culture descriptions were supplied by the yeast producer.

Wyeast #4766 Cider: Crisp and dry fermenting yeast with big, fruity finish. Creates a nice balance for all types of apples, pears, and other fruits. Allows fruit character to dominate the profile.

White Labs WLP773 Scottish Cider Yeast Blend: This is a blend of two ale strains and one wine strain. Unlike a lot of ale strains that typically dry out most ciders, this unique blend of Saccharomyces strains will leave some residual sweetness for a smooth mouthfeel. This strain is perfect for those looking for a still cider with some lingering apple characteristic or a dryer sparkling cider.

Fermentis SafCider AS-2: This is a good cider yeast for a fresh aromatic profile (apple, citrus) with nice elaborated fruit notes (applesauce) bringing a good overall complexity. For sweet and dry ciders, even under difficult fermentation conditions. Ideal for producing ciders with nice cooked fruit notes and a sweet and round mouthfeel.